Last week, when discussing the S&P 500 this was what we had to say in regard to the tone of the market, “Overall, the market has a semi-positive feel to it at the moment with a couple of recent gap-downs not leading to follow-through selling, as buyers are showing a willingness to step in on weakness.”

The level to watch for a breakout was 2742, which was cleared earlier this week to set up for a possible run to 2800+. There was a potentially bearish scenario discussed in Tuesday’s webinar, with the possible development of a rising wedge and drop from there. However, yesterday’s rally has that notion all but gone. If the market is to turn bearish it likely won’t be as a result of that pattern as long as today we don’t see a swift turnabout in favor of sellers.

From here to 2801 there isn’t anything standing in the way, making it the next short-term objective. It could pull back from that point, but we’ll worry about that upon arrival of that level. If the Nasdaq 100 and Russell 2000 are any indications (both at record highs), the S&P may be on its way to making a new record of its own at some point. To cast doubt on the upside, a break of the trend-line off the May low will be needed to undermine the current bullish sequence.

Confidence is key, check out this guide for 4 ideas on Building Confidence in Trading 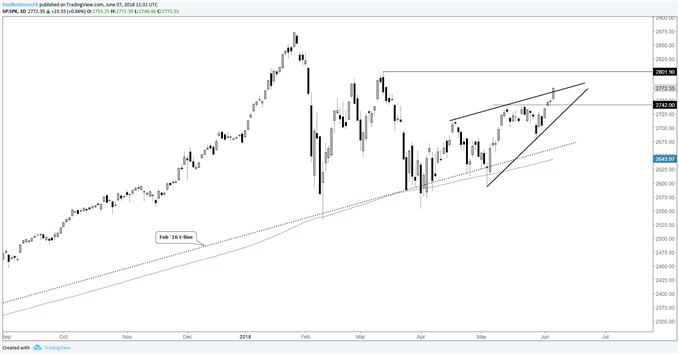 The Dow is lagging behind, but similar price sequence

The Dow Jones has been the laggard of the bunch, most closely resembling the price action in the S&P 500. It’s yet to clear itself of the wedge scenario, but if the market keeps on going it won’t be long before it does. Levels to watch on the top-side are 25450, then 25808. To turn the outlook neutral to negative, a break below the May trend-line at this time will be needed.