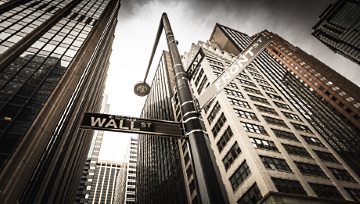 S&P 500 Chart Extended, but Momentum Not Worth Fighting

The S&P 500 has started the year off on a strong note, with fresh record highs notched each day this week so far. A question some are asking with a wary eye – is it sustainable? Perhaps the better question is – are there signs suggesting it isn’t sustainable?

To end the year, we made a case for why turbulent times lie ahead for the market; S&P 500 volatility is at ‘generational’ type lows, valuations nearly unmatched – historically, and given the rally starting back in February 2016 appears to be a 5th wave of an EWP cycle off the 2009 low. Overall, it is more of a call for an uptick in volatility as instability grows (and yes, at some point a major sell-off), and not necessarily a call for ‘the’ top.

So, while we could be in for a big-picture top and drop, the timing as to its beginning remains unclear – it could start next week, but it may not start for several months, if not longer. Longer-term it looks like we’ll end up lower than where we are today (and significantly so), but for now there isn’t anything in the price action which provides a strong edge for shorts. It’s also not the easiest spot to buy, either, given the recent run-up and increased risk of a dip.

With that said, the S&P 500 cash index closed yesterday at a short-term top-side trend-line extending over peaks since early last month. It could be a spot for weakness to begin developing. Today’s jobs report at 12:30 GMT time could have something to say about that. (Join Senior Strategist Christopher Vecchio & myself starting at 12:15 for live coverage of the jobs report.)

A decline off the highs may bring into play an interesting cross-road of three differently angled trend-lines. The first is the lower parallel of the month-long channel, the second is the trend-line off the November low, and the third is a slope dating back to April 2016. The area just below 2700 is an important one given the confluence. We’ll use these lines as a near-term guide – stay above, trend remains healthy, drop below and sustainable near-term weakness, at the least, could set in.

Check out these 4 methods for Building Confidence in Trading 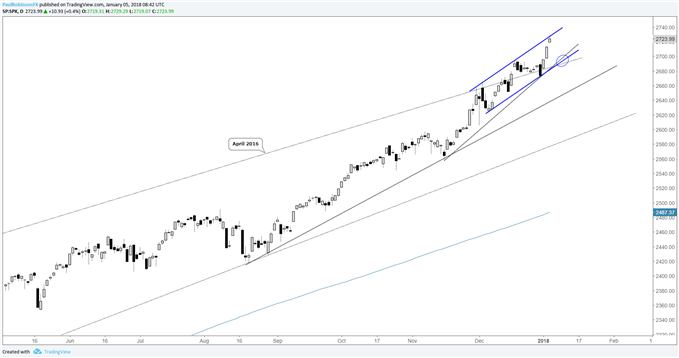