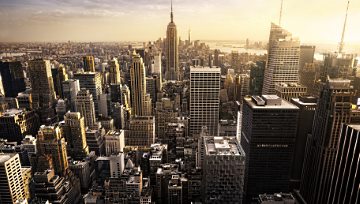 Just a few days ago seasonality trends turned from the worst of the year to positive and so this means stocks must continue to propel higher, right? It appears as though Q4 will end better than where it started (Q4 Equity Forecast). Not exactly a bold call given the past eight quarters in a row have been positive. But a hiccup is certainly in the cards and would be fitting to see soon since many have recently been discussing the flip to positive seasonality.

For now, though, let’s look at where the market could be headed in the immediate future and what could signal the beginning of a ‘hiccup’. Last week when we looked at the S&P 500 it had just finished up its eighth day in a row of gains, and this is what we had to say regarding the break above its only visible resistance: “On a pullback/consolidation watch how the market treats the recently broken top-side trend-lines, especially the June line. If it can hold as support then there may be an opportunity for would-be longs to join in on further upward momentum.”

The past week has indeed brought a period of consolidation with the market leaning on the June trend-line, and as long as it holds and we don’t see a break below the bottom of the recent high-level consolidation at 2542, then we look for another thrust higher to unfold. And while this appears likely to be the case we continue to believe any long trades entered at these levels are best sold into renewed strength as risk of a decline increases with each extended move higher.

The market is extended but we aren’t seeing price action which suggests we should turn our focus lower. Not yet. We’ve been warned on several occasions this year that we are on the cusp of entering a period of underperformance and once again we’ll wait for a warning to show again before turning our focus lower. Over the months these warnings showed up in sudden, sharp changes in momentum from one day to the next.

Paul conducts webinars Tuesday-Friday. See the Webinar Calendar for details and a schedule of all upcoming live events. 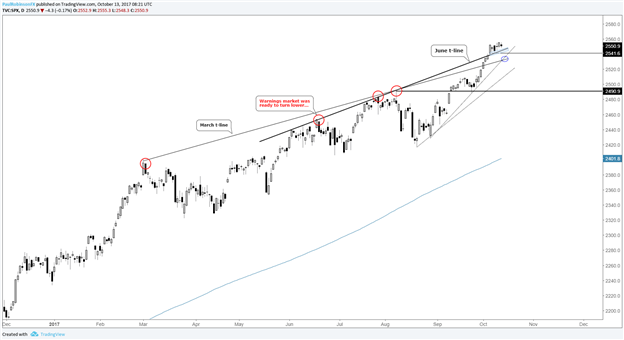