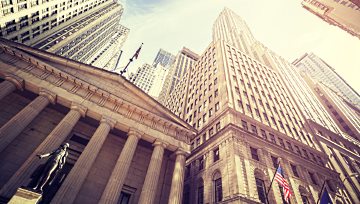 S&P 500 – Replay of Period During Spring May Be in Progress, Watch These Signposts

Find out in our Q3 Forecast what’s driving the S&P 500 this quarter.

In the forecast coming into this week, this is what we had to say: “That reversal [ referring to 8/8 ] turned into a mini-rout on Thursday. The damage done was a break below the June high and lower parallel rising up from May. This keeps pressure on the market to try and regain a bullish posturing. It’s done so before (over and over in this ‘buy the dip’ market), but can it do it again – right now?” In a way, so far, we got our answer – yes. Dip-buyers showed up again and while victory for longs can’t be celebrated yet, the market did manage to regain the previously mentioned broken technicals.

We’re at a bit of a cross-road with the spike lower and rebound. The market could be resuming the uptrend after a quick sell-off as it has done so many times before, or in the process of putting in a lower high and roll over again.

With those two scenarios in mind, here is what to watch for. First-off, look to the recaptured May parallel and old June high as support should the market dip from here. If we see a break back below 2350 then odds increase significantly that a lower high is being put in and the market wants to break lower. But should the S&P maintain above support then we’ll run with the notion the market wants to maintain a bid at the least, if not make a run on the 8/8 reversal-day intra-day record high. The period from early July to now looks very much like the period during April and May. Could we see a similar path once again? We’ll use the beforementioned support levels as our guide.

Yesterday, we saw some intra-day whipsaws following the release of the minutes from the July FOMC minutes, but net-net the market ended the day right where it was two hours earlier. Looking ahead, tomorrow brings U. of Michigan Confidence for August, potentially a market-mover, but look for it to have more of an impact on FX/rates than equities. 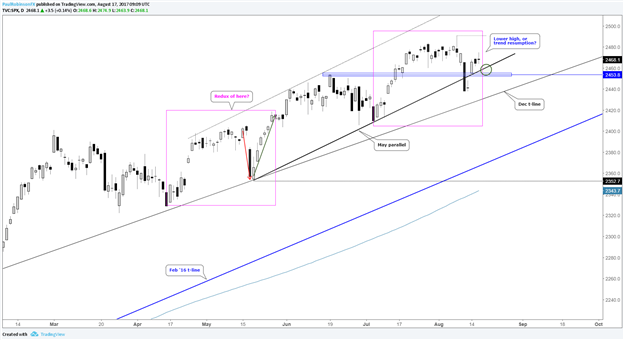 See the Webinar Calendar for a full line-up of upcoming live events with DailyFX analysts.