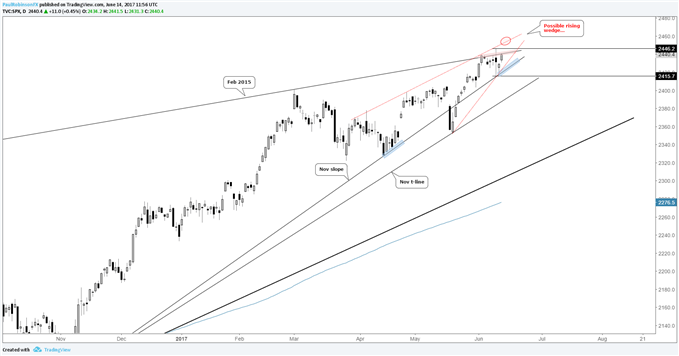 S&P 500: Break Higher Will Bring into Play Yet Another Overhanging T-line

What’s driving stocks higher? Find out in our market forecasts.

The S&P had a wild day on Friday due Goldman Sach’s cautious report regarding the mega-cap stocks which make up a large portion of the Nasdaq 100. While it was a damaging day for the tech-heavy index, the S&P managed to close the session relatively unscathed. The low on Friday came at slope support rising up from the November low.

Yesterday’s push higher put the market back at a top-side trend-line running off the February 2015 peak over the March 1 high and recent price action. It’s been a struggle to overcome, but with a push beyond this barrier and above the Friday high at 2446 a path should be cleared for at least another 10 handles or so before possibly stalling again. Another top-side line of resistance (~2355) lies not that far ahead dating back to the end of March, which could also constitute the upper line of a rising wedge. Before we get to that, though, we will need to see it fill out just a bit more and then break either the upper or lower trend-line.

A failure to break and hold above the Friday high, and sharp turn down through the November slope and Friday day low at 2415 would put a dent in a bullish case, and likely see further weakness towards the trend-line extending up from November under the May low.

Later today, the Fed is expected to raise rates by 25 bps, and barring a highly unlikely no-raise or 50 bps, attention will be on signaling by the Fed for the anticipated rate path for the remainder of the year. Barring any strong indications, today’s meeting may be rather uneventful, but as per usual traders should expect the unexpected. Sign up for live coverage of the FOMC announcment with Chief Currency Strategist John Kicklighter here.