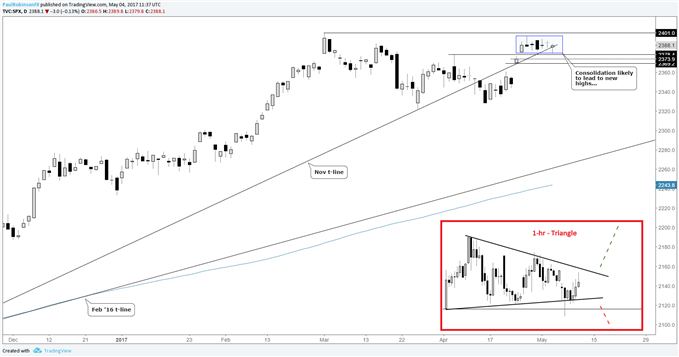 Not much has changed since we last looked at the S&P 500 on Tuesday, the period of consolidation below the March 1 high continues. Yesterday, the FOMC caused a spat of volatility, but nothing like some other times we’ve seen in the past. The FOMC minutes released on April 5 for the March meeting caused more of a stir; a 28-handle daily range. Yesterday presented a ‘whopping’ 10 -handle range.

Volatility remains very low. The CBOE Volatility Index (VIX) recently hit its lowest levels since early 2007. A sign of complacency, but it doesn’t mean it can’t stay low for a while longer. If the market continues to push to new heights we’ll keep an eye on the VIX; should it start to rise with the market it could be a warning sign for longs down the road. Rising volatility (uncertainty) in a rising market often portends a period of turbulence (market down).

For a longer-term view on the S&P 500, or another market of interest, see our quarterly forecast.

But we aren’t there yet, and looking at the near-term the recent consolidation is more likely than not to lead to a new high, and soon. The other day we were looking at the daily consolidation through the hourly chart, where a triangle is still in development. It’s reaching a point of maturity where the pattern is a valid one, and we’ll go with the break. To reiterate, the trend is higher so the break is more likely to occur to the top-side, but a triangle-break to the downside can't be ruled out. Bottom-line: wait for the break.

Heads up: Tomorrow is ‘NFP-Friday’. We’ll have a look at the jobs report for April. For details, see the economic calendar. As per usual, it will likely require a sizable beat or miss to get traders excited, and the bigger move in the event of an outsized print is likely to take place in the FX/rates space. There is also the French run-off election between Macron and Le Pen on Sunday, so gap risk on Monday is very much alive.