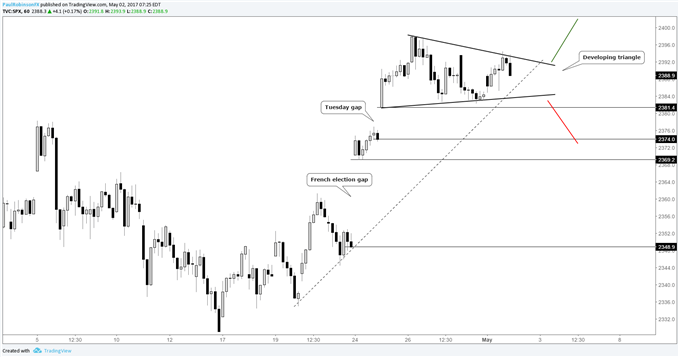 For a longer-term view on the S&P 500, or another market of interest, see our quarterly forecast.

Yesterday, we looked at the S&P 500 and said it looks as though it is consolidating for another move higher, which was based on the sideways price action on the daily time-frame after last week’s early gains. Pulling in a little closer (hourly time-frame) the consolidation is beginning to take on the shape of a triangle. It’s not yet fully developed, but if it is to mature it is likely to do so within the next day or so. Another jab lower and test of the lower-side of the pattern and then a bounce would be enough to fill out the formation.

As it currently stands with the bottom and top-side trend-lines it will be of the symmetrical variety, and given the prevailing trend the likelihood is for it to break higher. Should we see this unfold the measured move target based on the pattern height is ~2408, or 7 points into new record territory. Momentum could carry it further at that point.

A break lower (can never rule out a break against the trend with a triangle) would point to a move towards 2367, which is roughly where the bottom of the 4/24 gap-day low comes in at 2369. Get into that gap and the market might be in for some trouble as it makes a serious attempt to fill down to 2349.

All-in-all, it’s a rough, but increasingly plausible scenario that we see a triangle develop. We still need to be patient in its development. It would appear likely a top-side break is in the cards, but we can never rule out a breakdown. That’s the nature of triangles – they signal pending expansion in price, but can break in either direction, and are known to make a false break one-way then reverse to go in the intended direction. If a false break were to happen, with the trend higher, it is more likely the false break would be lower before reversing higher.

The potential fly-in-the-ointment for this becoming a tradable opportunity is the FOMC rate decision, policy statement on Wednesday. While there is no expected change in rates, and maybe we only see fairly benign language out of the Fed, the gyrations which result after the meeting concludes could be enough to wreck the pattern if there hasn’t already been a breakout.