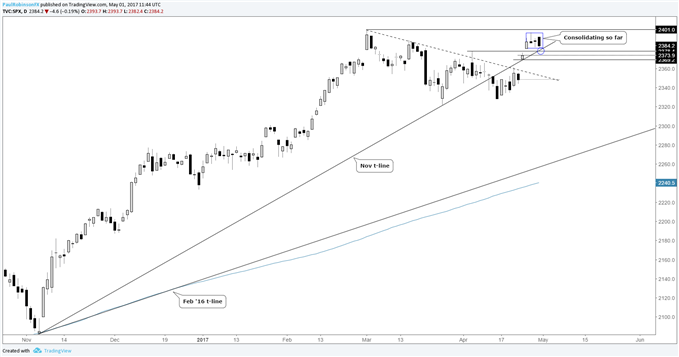 For an intermediate-term view on global equity markets, see our quarterly forecast.

Late last week we said the minor reversal-day in the S&P 500 which took place on Wednesday ‘may or may not have meaning’. So far, we have not seen any real follow-through to the downside, and it is looking as though Wednesday’s price action was simply short-term exhaustion rather than signaling of a deeper decline to come.

The market concluded last week on a semi-negative note, but when taking it in totality with the days prior the S&P is moving sideways, or consolidating after the gap-up rally on Monday and follow-through on Tuesday.

Looking to support, the November trend-line was reclaimed on the gap-day, which lies just beneath the Friday low. In the vicinity as well, is the powerful 4/5 reversal-day high at 2378. Should we see the first of last week’s two gaps get filled before moving higher, a fill of the Tuesday gap will come in at 2374. These various levels create a range of support from about 2380 down to 2374. As long as this area holds then it may not be too long before we see the March 1 record high of 2401 exceeded.

For the picture to become skewed towards suggesting a larger decline, the market would need to fall back into the Monday gap below 2369. If that were to happen, then the likelihood of seeing a drop down to 2349 would increase significantly, and also continue the range-bound price action we've seen the past two months. In this case, a ‘time correction’ would still be underway.

In any event, weakness at this juncture looks more likely to be bought rather than accelerated by additional selling.