S&P 500: Minor Reversal Day May or May Not Have Meaning

See how our analysts see the bull market playing out for the remainder of Q2 in our Equity Markets Forecast.

The question we asked on Tuesday was, “Is the correction over?”. The downward trend-line from the record high on March 1 was crossed with Monday’s gap, the November trend-line was re-captured, and the 2378 hurdle was also overcome. This opened the market up for a push to new highs. But Wednesday’s price action may have hit the pause button on that notion.

Yesterday, the market was on the verge of new highs before reversing three points shy of the March 1 record high. The intra-day rally and sell-off carved out a minor key reversal day, but to what extent it will matter we shall soon find out. It wasn’t a huge reversal, but one worth taking into consideration. Generally, the tone of the market is bullish, and if we are to soon see a push beyond 2401, then the reversal day won’t amount to much more than an intra-day sputter. But even if that is to be the case (which we obviously don’t know just yet), we will give respect to the bearish reversal day from resistance as possibly meaning we see a bit of a retracement from here.

On weakness, watch how the market responds to a test of 2378 and the November trend-line. A minor decline into these levels may amount to all weakness the reversal produces. If the market turns down hard, though, taking out support then our respect paid to yesterday’s price action will have turned out to have been warranted. A fill of the Monday gap might be on the market’s mind. Needless to say, but a break above yesterday’s high and then 2401 will put to rest any bearish implications of yesterday’s reversal. 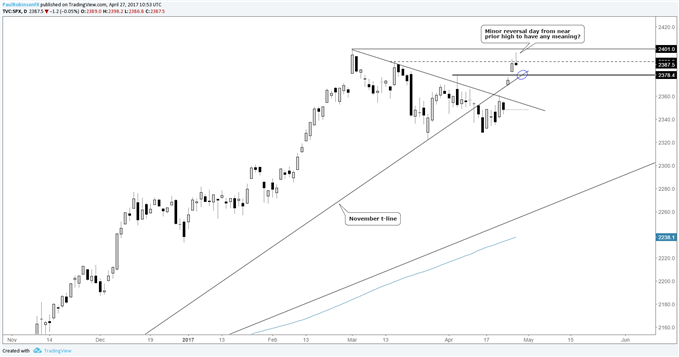 Paul conducts webinars every week from Tuesday-Friday. See the Webinar Calendar for details, and the full line-up of upcoming live events.