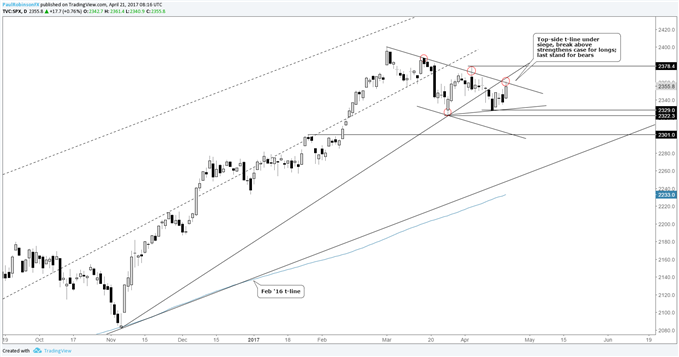 Can the S&P 500 continue its bull-run in Q2? See ourforecast to find out what is driving the stock market!

On Tuesday, we asked if Monday’s rally was as good as it gets for the week. Our bias has been towards lower prices, as we’ve been operating off the notion of seeing the S&P 500 head towards a lower low beneath the March low of 2322, but so far it has managed to hold above despite the sequence of lower highs since the record high notched on March 1. We’ve yet to see a lower low. Last Friday’s low arriving above the March low may turn out to be the opposite, as a higher low may be in place, potentially marking the beginning of a once bearish sequence turning bullish.

More downside could be in store, though, but if that is to be the case then we want to see the top-side trend-line hold as resistance. This pretty much means yesterday should be as good as it gets this week, and over the short-term in general if the slightly bearish tilt to the chart is going to be maintained. A cross beyond the upper trend-line doesn’t give the ‘all-clear’ for longs, but it would certainly strengthen the case that the correction since early March has concluded. If the market turns lower right here, right now we still view the 2300 area as a possible spot for the decline (correction) to end. A break above both the top-side trend-line, recapturing of the November trend-line, and higher high above the April 5 swing high of 2378 would be the ‘all-clear’ signaling in our book that a new leg higher is underway.

All-in-all, the case for lower prices is still intact, but barely. The market needs to turn lower pronto or else we will be looking to change gears towards a market rally.

Join Paul every Tuesday for the ‘Equity Indices & Commodities for the Active Trader’ webinar. See the Webinar Calendar details and a listing of all live events with DailyFX analysts.