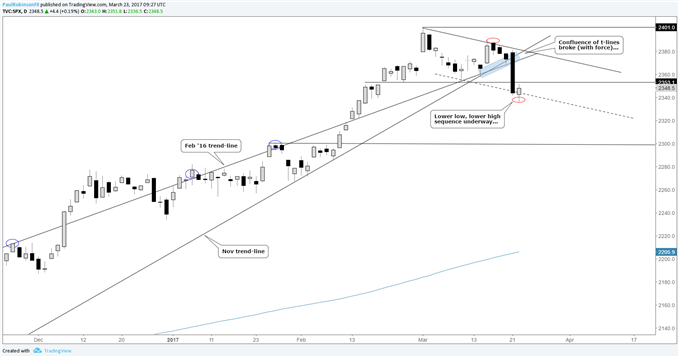 New to the markets? See our Trading Guides.

On Tuesday, when we discussed the confluence of trend-lines off the Feb 2016 and November lows, this is what we had to say: “It would require a break of the trend-lines and 2353 to add validation to the notion that we are seeing a deeper decline developing.”

The break on Tuesday was brutal, and without a turnaround soon – damaging. Yesterday’s bounce was meager, and if weak price action (slow upward momentum) continues for a short period of time, then the Tuesday break will likely prove to be the real deal. Market participants have been conditioned to ‘buy-the-dip’ (BTD), which still may be the way to go. Just that it may be prudent to do so later-on at lower prices.

Getting back to the short-term picture: There is a lower high, lower low sequence developing, which, again, is why a weak bounce would set up for more weakness as another lower high is carved out and the bearish sequence furthers itself along.

An ideal scenario in the short-term for shorts would be for the S&P to attempt to trade back above prior support at 2353/54 and fail to close above on a daily basis.

If the market can hold up and build a descending channel, a bull-flag could develop – a scenario which will take time and one we will delve into further at a later time should it come into view.

Other global markets don’t look so hot, and in the case of the DAX and Nikkei – outright bearish. (More on the DAX here, Nikkei here.) Generally speaking, global markets are setting up for a period of ‘risk-off’ and the S&P is likely to head lower for the foreseeable future.