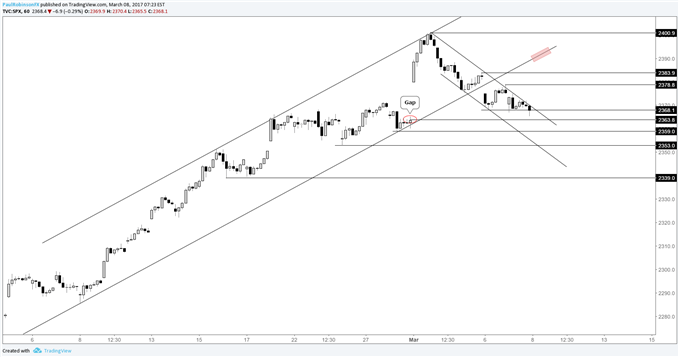 The S&P 500, since backing off record highs following President Trump’s address to Congress, has been gradually working its way lower. It entered into the gap from last Wednesday, but has yet to fully fill it. Gaps are often times filled, especially once entered. With that in mind, we’re close, but yet to see a full fill (a good chance it happens today). This will be our first level of support to look for a market reaction at, ~2364. Below there, 2359 will quickly come into play and then 2353. The descent off the highs has been in an orderly fashion, forming a downward channel, or potential bull-flag. On a break of the top-side trend-line we look for the market to make an attempt to resume its uptrend. Looking to the top-side on a break higher, 2379 and 2384 will be the immediate focus as resistance. Beyond those levels the back-side of a channel running up from early February will come into play.

The Nasdaq 100 is also carving out a channel, or potential bull-flag similarly to the S&P. The 100 index has held better than the S&P, though, during recent sessions, and looks likely to lead any surge higher which may take shape. Levels to watch as support are 5338, gap-fill at 5330, then 5317 & 5303. On a break of the top-side trend-line we will look to 5373 as the first level of resistance followed by the record high of 5398.