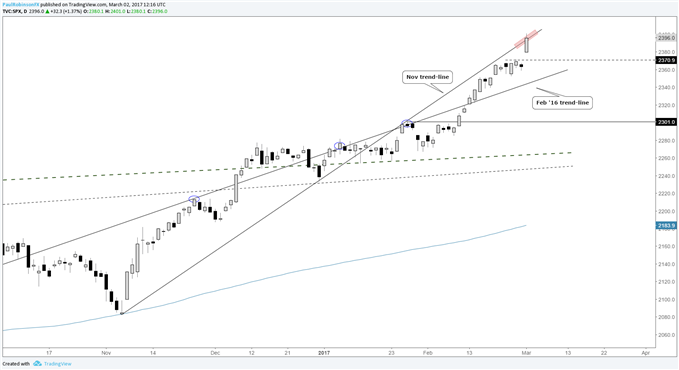 The other day we looked at a short-term price sequence which suggested if it gained momentum we could be in for a short-term top. Not so fast. Later, on Tuesday evening (EST time) in the U.S., President Trump addressed Congress and it won over the market; resulting in the S&P futures gapping higher on Wednesday morning and then rallying sharply for all but the last five minutes of the day.

The SPX closed the session at the bottom-side of a trend-line extending higher off the November low and back below the psychological 2400 level. Given the momentum of the market these are only considered minor points of resistance.

From a big picture standpoint, chasing the market higher here doesn’t present the best risk/reward. But as we’ve been saying during this ‘blow-off’ rally, outside of very short-term maneuvers (day-trades), shorting has no appeal. No change on this stance.

Where is the market headed? The expectation on this end is that in the not-too-distant future we will see a meaningful top and a resulting period of sideways price action at the least, and likely a material retracement given the extreme nature of the rip. But these ‘blow-off’ top type moves can go much further than we think, and until we see price action suggesting the broader move higher is finished or consolidating we will stand aside and wait for better signaling from the market.