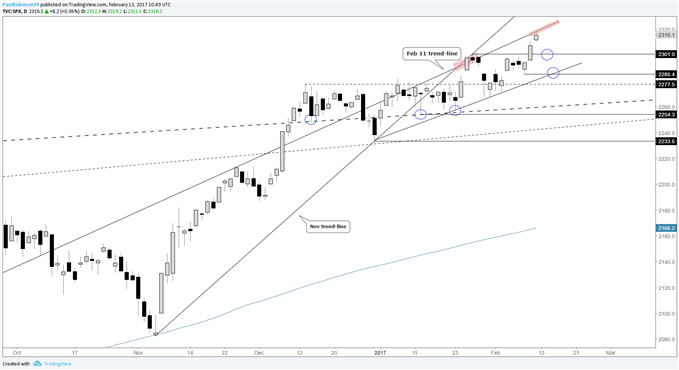 On Thursday, we looked at short-term trading levels in the S&P 500 and kept with the theme of higher prices in line with the trend. The market tacked on gains into record territory on Thursday and Friday. The up-move put the S&P once again up against the underside of the Feb ’16 trend-line, a line which acted as resistance in late January, and could again act as resistance in the near-term. However, given resistance is in the form of a t-line in the same direction as the market, it’s only viewed as a minor in significance. A shallow decline developing from current levels would help validate this notion. An aggressive turn lower would raise red flags that the t-line may require more respect as resistance.

Support on a turn lower comes in at the old highs of 2301, then the trend-line off a swing low to end last year; this aligns up approximately with the 2/8 low at 2285. Below there the top of the Dec-Jan congestion period around 2277 would come into play. With these levels in mind, there are several levels of support for the market on any decline which should develop.

Chasing the market higher here is not without its risk, and we take preference to buying dips instead of buying in hopes of continued momentum. Given the current environment, this means we’ll need to be patient in finding a better risk/reward situation for new longs on small countertrend pullbacks.