In recent days, we have been checking out the market from a close-up view, looking at 60-minute charts of the S&P 500 and Nasdaq 100 for short-term levels to operate off of. Today, we’ll dial back a bit and put things into broader perspective.

Since Friday, when the FBI announced it was furthering its investigation into presidential candidate Hillary Clinton, the upcoming election on Tuesday has taken an uncertain turn. One thing we know: Markets do not like uncertainty. It is reasonable to conclude that stocks will ‘trade heavy’ until the election passes.

The FOMC announcement later today is already looking like an afterthought. The Fed is expected to remain on hold until the December meeting where, according to the CME ‘FedWatch Tool’, there is over a 68% probability of a rate hike. As per usual, today the market will be focused on the Fed’s language in its policy statement, and it seems unlikely there will be anything to ruffle the market's feathers.

We saw a good deal of selling yesterday, enough to push the S&P below critical support at 2115 on a daily closing basis. There was a sizable late-day rebound, but still the market was unable to close back above the critical support area it has held since mid-September. The lower low below support doesn’t mean the market will necessarily fall apart, but it does help reinforce the path of least resistance to the downside. Resistance clocks in at the 2115/20 zone on a bounce, and must be recaptured if the market is to reverse its recent course.

On the downside, we will be looking for yesterday’s low at 2198, then the lower parallel belonging to the top-side trend-line off the 8/23 high and the lower parallel matching the trend-line off the 10/10 high (~2093). While not a big advocate of moving averages, the 200-day, especially in equities, is worth keeping an eye on given its long-time popularity. It currently clocks in at 2080. At this time, there is no clearly visible price support until all the way down to the 6/27 low at 1992. We won’t worry about that right now unless the situation gets really dicey. 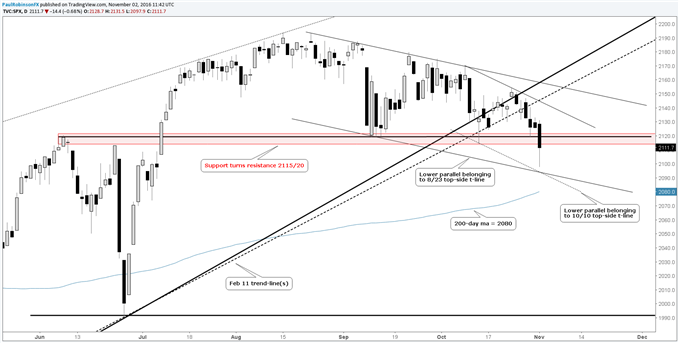 Check out one of our helpful trading guides designed for traders of all experience levels.