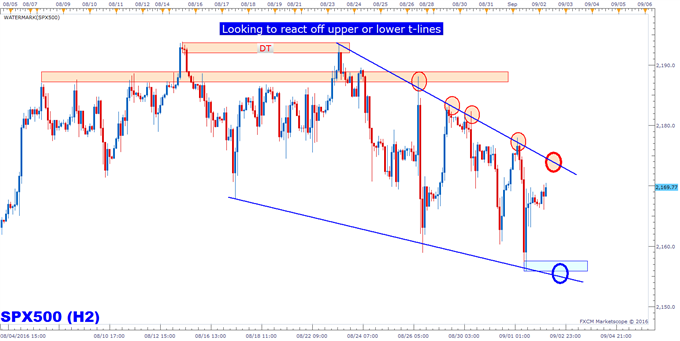 In Thursday’s commentary, we said we were turning to today’s jobs report as a possible source of volatility for the S&P 500. But before we even got to today we saw a little volatility yesterday after the S&P 500 found resistance at the noted trend-line off the 8/23 peak. It was the 4th touch and 3rd true lower high since beginning the choppy trend lower.

The 20+ handle drop made a lower low from the prior two bottoms made in late August trade, but was reversed sharply. This led to yet another session of modest net change by day’s end.

Heading into today’s jobs data we are still operating within the constructs of a downward trend, albeit with little momentum. Another rise, touch, and reverse off the two-week trend-line presents another opportunity for ‘would-be’ shorts.

A decline to yesterday’s low and just a tad lower will bring in an underside trend-line running back to a low created on 8/17. For now, we will operate off of that as an area of support.

When it comes to big data releases like today’s, often times, barring a massive deviation from expectations, the market will overact initially following the release and then fade before settling. On that, keeping those upper and lower bounds in mind could present spots from which to take ‘fade-trades’.

No predictions on this end as to what the outcome will be, taking the usual reactionary stance. Given the past two NFP releases have been sizable beats, one has to wonder, though, if we will see a third big surprise in a row, in either direction. The market is looking for an August NFP figure of +180k, the unemployment rate to tick lower to 4.8% from 4.9%, and a small move down in average hourly earnings to 2.5% YoY from 2.6% YoY prior.

Track trader sentiment in real-time via the ‘Speculative Sentiment Index’. If you are looking for some weekend reading material, check out our free trading guide, “Traits of Successful Traders”.