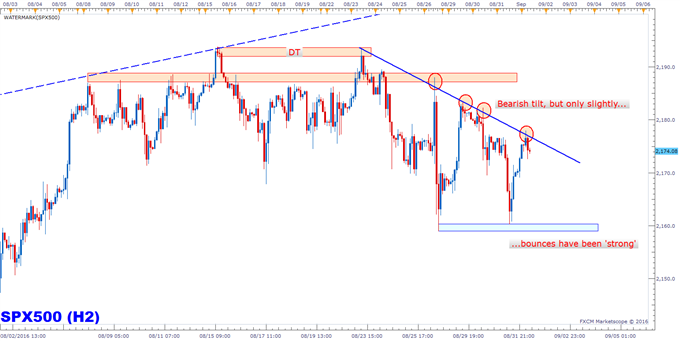 Since we last discussed the S&P 500 (on Monday) it’s had a few decent sized swings, but the net impact – virtually nil. We were looking to the drop below several August pivots in the 2168/72 vicinity as a confirmed break of the neckline of the August double-top (DT) pattern.

The preferred approach given this very dull summer market environment has been to fade levels upon failure and avoid chasing any type of price moves. So it was with the break of the double-top neckline, except the market never really turned lower once it bounced and retested the area surrounding 2170. The S&P sailed a bit higher before doing so.

Where does that leave us today? Good question. The S&P is no better or worse than it was in the middle of July, with very little movement in between.

The swing from yesterday’s low into today could be in the process of making a third lower high since peaking on 8/23. Trend-line resistance is keeping upside price action capped at this time. Until the market can hurdle this line a bearish tilt remains in place, but certainly not a strong bias given the two bounces we have seen in recent trade following attempts by the market to decline.

We continue to take the approach of trading only when volatility flares up (like Jackson Hole) and levels are touched and rejected. Indices aren't the best game in town right now, FX are moving with a bit better flow, but “it is what it is until it isn’t”. Which is likely soon. The summer lull will eventually come to an end as market participants file back in from summer vacation. Monday is Labor Day and markets in the US will be closed, but not long after activity begins to pick up. So, if you are looking for a silver lining, there it is...

But, before we pack it in for the week, tomorrow we have the U.S. jobs report due out at 12:30 GMT. This could present a good opportunity should we see a sizable deviation from expectations, especially with the FOMC coming up later this month and expectations of a rate hike increasing after Yellen spoke on Friday at the Jackson Hole Symposium.

The market is looking for an August non-farm payrolls figure of 180k, the unemployment rate to tick lower to 4.8% from 4.9%, and expectations are for average hourly earnings to notch lower to 2.5% YoY from 2.6% prior.

Later this morning, at 14:00 GMT, we have ISM Manufacturing data for August. Analyst are looking for a slight slowdown to 52 from 52.6 prior.