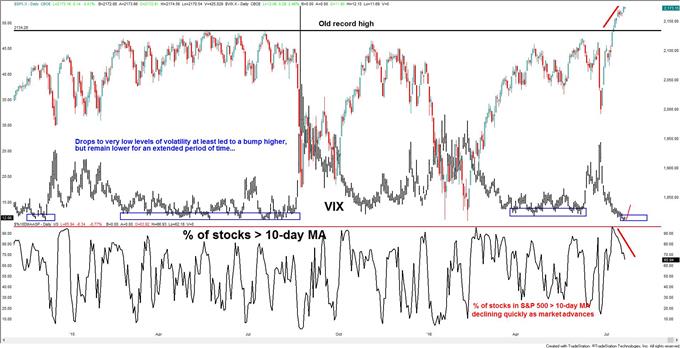 S&P 500: Complacency and Waning Breadth Heightens Risk of a Decline

Another day, another grind in the S&P 500. Today was the ECB rate decision and press conference, and as expected Mario Draghi & Co. made no changes to their current monetary stance. Draghi also provided very limited indications on future intentions. One didn’t need to listen to the press conference to know this, as the euro, at the time of this writing, is trading about where it was before Draghi began speaking. This goes for European equity markets and the S&P 500 as well. A non-event, event.

As we have been making note of lately, the market is in a, “too high to buy, too strong to short” state at this time. Breakouts into uncharted territory can lead to difficult price action as volatility shrinks without any perceived reasons to be concerned (complacency).

One needs to look no further than the CBOE Volatility Index (VIX) to see this. On an intra-day basis, yesterday the VIX dropped to its lowest level since August 2014. Sans a catalyst volatility can remain low, but given it is so low, risk has become skewed to the down-side given the high level of complacency. A minor bump higher in the VIX can be expected at this point, which is another way of saying stocks should decline soon, even if only by a little bit.

Also keep in mind the fact the market in recent years has not generally treated those too kindly who bought into new record highs, as the market within days to a few short weeks most often times declined below the prior record high (CFD: SPX500 – 2137, SPX cash index – 2134).

But until we see price action suggesting a decline will unfold short trades will be difficult to initiate. Conversely, given the market appears to be running out steam, as we pointed out yesterday – evident by the diminishing number of stocks participating in the advance – along with a high level of complacency, establishing fresh longs at these levels appears to be a risky proposition.

Find out what separates successful traders from the rest in our trading guide, “Traits of Successful Traders”.