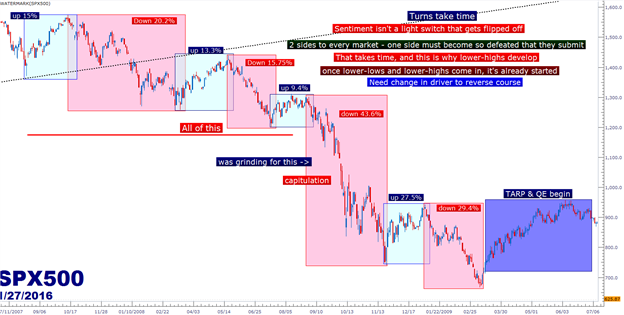 SPX500: A Story That Can Only be Told with Charts

While much of the world wrestles with whether or not stock prices are going to move lower, whether or not we’re at the forefront of a global recession or even if we’re nearing a point where Central Banks are beginning to feel the strains of panic themselves, the chart has already started indicating a move lower. We discussed this before all the chaos started with the turn of the New Year as the initial signs of a top had already presented themselves. The first thing that we have to establish here is that major market turns take time. This isn’t a day-to-day thing where you just walk into the office and all of the sudden ‘oops, it’s bearish. Let’s sell.’ No, markets are controlled by the collective opinions of millions of people (the herd). Being from Texas has taught me the luxury that you can’t expect a herd, any herd to collectively move at once with agility. This takes patience.

One look at the anatomy of the Financial Collapse (below) can show you how long it takes a herd to turn their opinion in a market. And keep in mind, the writing was on the wall here: Mortgages had already started blowing up, and then stock prices followed. We didn’t have capitulation (the -43.6% move) until the bulls had been vanquished by lower-lows and lower-highs to the point of realization that the bull market was not coming back.

If you watch the common sources of financial media, you’ll hear the same wonderment right now that we heard back in Q4 of 2008 where various hosts and personalities toggle between ‘bullish, bearish and everywhere in between.’ This is normal at market turns. The herd gets confused because doing just the same old thing doesn’t work in the way that they’d become accustomed to. This is evidence of the herd actually taking notice of the road ahead and realizing, ‘hey, maybe I should start thinking about zigging after six years of zagging.’ But even this isn’t enough. This is just enough reason to start getting less bullish. The reasons for bearishness don’t come in until there’s actual motivation: A spark, if you will. But before that spark can start a fire, sentiment has to wane, and we’ve already begun to see that happen. But as that happens, we’ll often see considerable volatility. This is when the last-minute bulls slug it out with the new, fresh bears. This is one of the reasons that equities have been whipping on both sides of late.

The chart below goes over the swings that we’ve seen in the S&P over the past five months. The volatility of recent is undeniable, and again, this is very common at major market turning points. 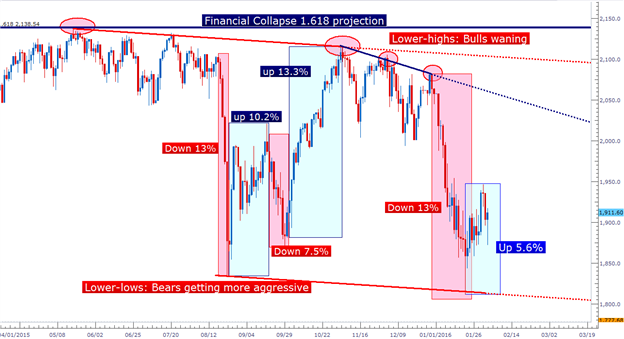 But, nonetheless, you hear these really smart and well-dressed and supposedly educated people get on television to make a case for higher (or lower) stock prices as if they were delivering the closing arguments in a really important trial in which someone’s life hangs in the balance. This can all be utterly confusing, and all of this pandemonium just adds to the noise, making the prospect of ‘reality’ seem distant and confounding when trying to trade a turn. But the luxury to market participants is that we can separate the noise from reality very simply by looking at a chart. The price on the chart is the going price. This is the same that banks or hedge funds can act on (or in many cases the prices that they’re feeding into the market) and this, on a microcosmic level, always has a level of efficiency; because the simple offer to your bid is the meeting of minds on a transaction at a price that you both agree upon at the time. It’s only with hindsight that we can invalidate the efficiency of that market at that price at that point in time.

And now that the Fed has begun to raise rates, and as the prospect of more QE out of the world’s largest economy became more and more distant, those reasons for buying stocks have started to dwindle and dwindle. After all, QE has basically been a propellant for stock prices over the past six years. Each hiccup or misstep in financial markets was met by more and more QE. The chart below illustrates each of the three rounds of QE along with Operation Twist. This got so contorted that bad news actually became a positive for stock prices.

That’s right – the diametric opposite of what ‘should’ happen in an efficient market. For a long time, ‘bad was good,’ because that simply meant more and more QE from the Federal Reserve. During this time, good news actually became the scourge of equity investors. Because that meant less QE: Complete and utter distortion became commonplace as the herd adjusted to the norm.

A Market Truly Propelled by Stimulus

The Fed. On the above chart you can see where they basically came in to support markets at multilpe points in the last six years. The Fed has said no more, at least for now, as they look to normalize policy. And this tighter policy comes at a tough time as other issues have begun to become prominent. China is in a very precarious state, and Oil prices have likely started a process of havoc in the American economy that we’ll be hearing more about over the next couple of quarters.

So the market’s most bullish facet, Fed support, is missing at a time when these other very threatening issues are developing. But perhaps more to the point, this may be the Fed’s intention. Ms. Yellen mentioned in December that she felt there was a higher probability of a recession if the Fed didn’t raise rates. Further to that point, stock prices are not a Fed mandate. This is but a consequence of the Fed attempting (and thus far, not succeeding) at their dual mandate of healthy employment and inflation.

As long as the Fed continues to talk up higher rates, the S&P is at a risk of continued correction-like moves, and the charts begun to show this with lower-lows, and lower-highs. After the massive move to start the year, stock prices have begun retracing; but in reality we’re really just working on a bear flag formation. On the chart below, we’re taking a look at that formation on the 4-hour chart with a Fibonacci retracement of the most recent major move applied. Notice that the 50% Fib comes in just a few handles shy of the 38.2% retracement from the previous major move (2137 top to 1833.5 low). This is a confluent level that will become usable in a moment: 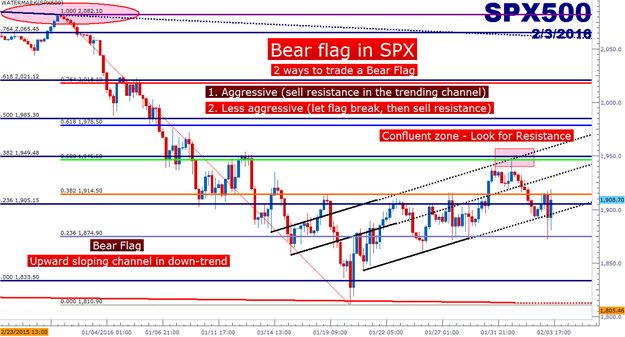 There are two ways to trade a bear flag.

The aggressive way is to get short with a stop above resistance, and wait for the break. If the break doesn’t happen, the trader wants to be taken out as new highs are printed in the effort of avoiding a huge loss. That level of relevance with the above setup is that confluent zone of resistance in the ~1,950 area. And if using that, you’d likely want to nudge that stop just above 1,950 so that you don’t get wicked out if the high is 1,950.1.

The less aggressive way (and I’m not going to use the term ‘conservative’ here, because there is nothing conservative about trading turns), would be to wait, let the flag break to prove that bears will be able to take control, and then wait for resistance to show after the up-trending channel has broken. The level of relevance for that approach would be 1,875, which is the low for today. Let prices break below that to prove that bears may, in fact, be able to keep driving this lower. And once that’s taken place, look for resistance on the hourly or four hour charts before triggering short. Stops can still be assigned above that 1,950 zone of resistance.