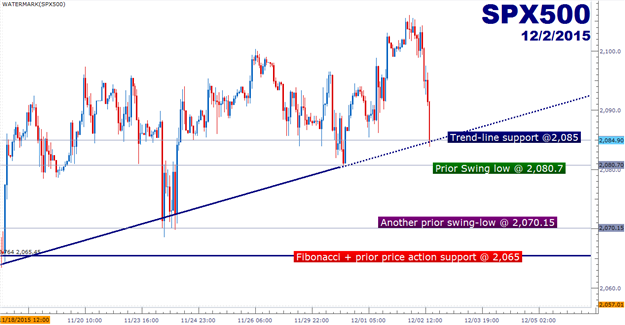 For all of the excitement and fireworks around markets of recent, the S&P 500 hasn’t really done all that much. In our last article, we noted how continued strength in the S&P had brought prices right back near those previous swing-highs of 2,116.4 and 2,137. But with a heavy batch of data in the first two weeks of December, we’ve seen that up-trend stall as prices have begun to range near these previous swing-highs (resistance values). Does this mean that a reversal is afoot? Not necessarily. But it does mean that buyers will likely need more motivation to push prices higher and beyond those previous swings. With a pivotal ECB meeting tomorrow followed by the last NFP report before the December FOMC meeting, the potential for that motivation is there, and the next two weeks can certainly inspire significant moves in either direction.

On the long side, we have the luxury of the near-term support variants that have developed and shown over this two-week period of range. Traders can use these levels to look for support, at which point they can look at that top-side trigger with a stop cast below a lower support value. Let’s look at the below houlry chart to pick out some of these potential supports:

Notice how there are at least four potential support points in the 20 handles underneath current price action. This is the nature of a ranging or choppy market. The upshot is that traders that want to push the long side can simplify matters by simply letting price action illustrate the potential for support (as will often be indicated by wicks on the under-side of price action), and then triggering the entry with a stop below the lower support value. This way, if an up-trend does put in a continuation move (which will often be coupled with higher-highs, and higher-lows), that stop value should remain respected.

The 2,065 level has been especially interesting of late, as this is the last primary Fibonacci value (the 76.4% retracement) built off of the move on China’s Black Monday. That Fibonacci retracement can be found by drawing the move from the top at 2,137 to the bottom on August 24th at 1,833.50. Each of the retracement values of that Fib have seen significant price action, 2,065 included. For traders that want to manage a long position conservatively, they can look to lodge stops below this value in the effort of giving a long position more room to ‘work.’

On the profit target side, 2,100 becomes a primary level of interest as that’s given quite a bit of resistance over the past few days, only go show a slight break earlier in the morning. After that, the previous highs become targets at 2,116.4 and then 2,137.

On the short side, this is likely the level tha thas the most interest given the potential for a turning point in the macroeconomic environment. Given the strength of the recent move in the S&P, traders would likely want to wait for fresh lows to come in to prove that sellers may be able to take control. The move over the first two weeks of November highlights the potential, when the S&P throttled lower by 93 handles, only to catch support mid-month. This produced a lower-high (longer-term) underneath that 2,137 print earlier in the year, and this could be offering a setup for a longer-term short position. But, again, traders would likely want to see price action break lower before trying to call a top. If this market is actually going to reverse, there will likely be numerous opportunities to jump in the down-trend on the way lower, after it’s been confirmed. 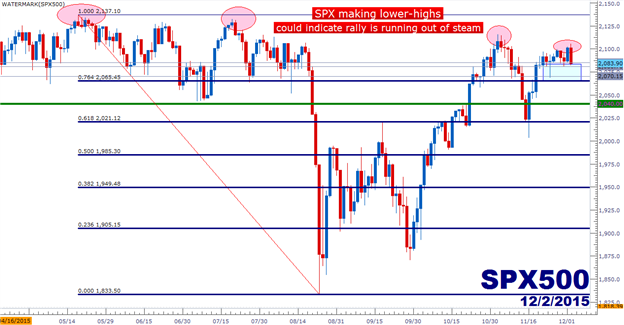