S&P 500 Technical Outlook: The Spooz is Flying on Helium

In our last article, we looked at the bull-flag formation that had formed in the S&P 500 as prices retraced lower after setting a new short-term high. This channel had offered quite a bit of support/resistance over the two-week period that price action was working within the channel, and as we had discussed in that previous piece, a near-term Fibonacci retracement could offer directional levels for the S&P moving forward. This Fibonacci retracement can be found by drawing the major move from the 2,137 high set earlier in the year to the 1,833.50 low that was hit on China’s Black Monday (August 24th). I’ve left that prior bull-flag channel on this chart, because I’m expecting price action to revisit it at some point down-the-road, and until a new high or low comes in the market, this Fibonacci retracement should continue to offer analytical setups.

But for now, the juice is loose and the bull is on the run. After a stumble last week that saw price action break below the channel, and then break down to the 2,065 level (the 76.4% Fibonacci retracement of the most recent major move), and then 2,040 (prior price action support), and 2,021 (the 61.8% Fibonacci retracement), prices set a new short-term low just north of the psychological 2k level. But just as quickly as prices melted down, after support came in, they shot right back up, catching near-term resistance at each of those prior support levels.

At this point, traders do not have the luxury of a well-defined entry, as price action has moved far away off of those previous support levels to obviate the attractiveness of any potential profit targets. For traders that really want to push the move, and don’t mind taking on an aggressive entry, there is a near-term swing-low that’s been set at approximately 2,078.5 that could offer a level to work with: So, traders can look to lodge stops below this support to take on ~14 handles of risk, but this would mean that a new short-term high at 2,105 would only offer a 1-to-1 risk-reward ratio. And for traders that need a 1-to-2 to excite them enough to pull the trigger, price action would need to run up to a new intermediate term-high of ~2,120 to justify a stop below 2,078.50. For those that do want to push the long side, or are comfortable taking on 14 handles of risk, profit targets can be cast towards 2105, 2115 (prior price action swing-high), 2125 (psychological level), and finally 2,137 (the all-time high).

Alternatively, traders can try to wait out next week ahead of the onslaught of data due out the first week of December. With this type of approach, those bigger picture support levels could be watched at 2,078.50, or 2,065.45 or even 2,021 for a potential top-side entry going into the data. 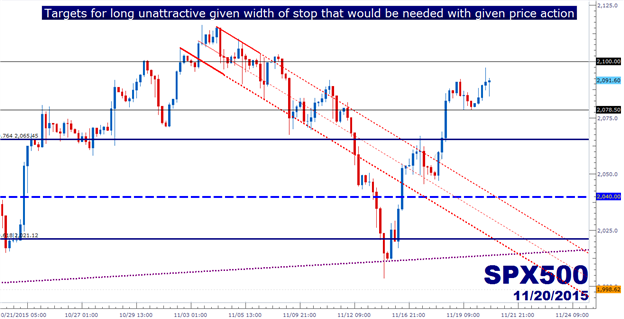