The New Zealand Dollar’s stretch of weakness appears on track to continue. After losing around -5% against a basket of major currencies in November, the rebound in December was offset by another decline around -4% in January.

On one hand, the Kiwi’s weakness has to do with rates markets getting too far ahead of the Reserve Bank of New Zealand, which has left the New Zealand susceptible to policy disappointment. On the other hand, the instability seen in risk markets at the start of the year has exacerbated an already weak trend in the Kiwi.

In the near-term, despite a torrid rebound in global equity markets coupled with a weaker US Dollar (via the DXY Index) over the past two days, the New Zealand Dollar has not been able to keep pace. In and of itself, this is a bad omen: a weak currency has only produced a feeble rebound in an easier environment, leaving it vulnerable to further downside in the immediate future. 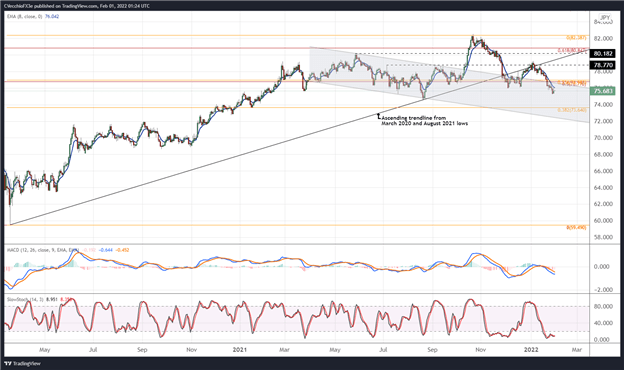 At the start of 2022, NZD/JPY rates failed to hold above the ascending trendline from the March 2020 and August 2021 lows, and the subsequent attempt to climb back above said trendline failed again in the middle of the month. Since January 14, the pair has closed below its daily 8-EMA every session; even the rebound seen at the start of this week produced a long upper wick, hinting at sustained selling pressure.

NZD/JPY rates are still below their daily 5-, 8-, 13-, and 21-EMA envelope, which remains in bearish sequential order. Daily MACD is continuing to trend lower below its signal line, while daily Slow Stochastics are nestled in oversold territory. Opportunities to sell rallies against the daily 8-EMA – the area around 76.00 where December’s double bottom was established – should be seized as the pair is now back within the descending channel from April to October 2021. The failed bullish breakout attempt hints at a deeper setback towards 72.00 over the coming weeks. 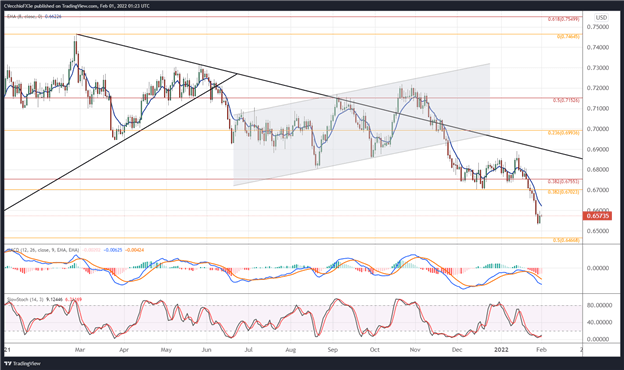 Like their NZD/JPY counterpart, NZD/USD rates have closed below their daily 8-EMA every session over the past two weeks, and bearish momentum remains strong. Still below its daily EMA envelope, which remains in bearish sequential order, NZD/USD rates are still in ‘sell the rally’ mode. Daily MACD is trending lower below its signal line, while daily Slow Stochastics are holding in oversold territory. The immediate target lower is 0.6467, the 50% Fibonacci retracement of the 2020 low/2021 high range. Only a close above the daily 8-EMA would invalidate this perspective. 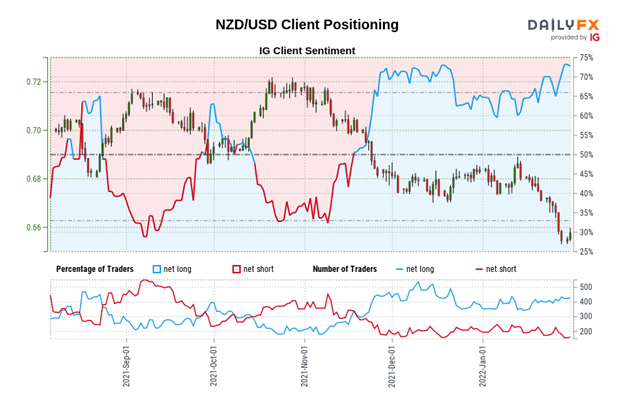 Positioning is less net-long than yesterday but more net-long from last week. The combination of current sentiment and recent changes gives us a further mixed NZD/USD trading bias.