RBNZ Not So Much of a Burden

For much of November and the first few weeks of December, the market’s expectation of an extremely hawkish Reserve Bank of New Zealand in 2022 served as an obstacle to the New Zealand Dollar. Having already priced-in a rate hike at every meeting next year, there was really no more room for speculation to run. A proverbial albatross around the Kiwi’s neck, the fact that rates markets are now less aggressive in their 2022 RBNZ rate hike expectations is giving the New Zealand Dollar some breathing room; the unwind of the most aggressive of these hawkish bets has played out, in a sense.

As a higher yielding, high beta currency, the New Zealand Dollar was likewise negatively impacted by COVID-19 omicron variant concerns, which seem to levy a meaningful toll on global growth in 4Q’21. But as the data from South Africa and western economies has revealed, the lower lethality of the omicron variant suggests that the global economy may not be impacted for an extended period of time; concerns should run their course by mid-January.

Consistent with the rebound seen among growth-linked assets globally over the past few days, the New Zealand Dollar is benefiting from a resurgence in risk appetite as it appears that the hallowed Santa Claus rally in US equity markets has finally arrived. Concurrently, technical developments in NZD/JPY and NZD/USD rates are implying that short-term bottoms may have been established. 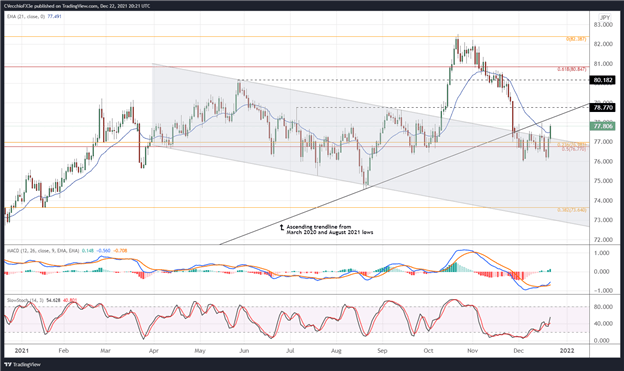 While NZD/JPY rates entered December back within their descending channel in place between April and October, the lack of follow through to the downside is worth noting. A double bottom may have been established during this month, and now NZD/JPY rates are on the verge of closing above their daily 21-EMA – the one-month moving average – for the first time since November 18.

Coupled with daily MACD churning higher (albeit below its signal line) and daily Slow Stochastics having advanced through their median line, it appears that NZD/JPY rates may have further room to run higher towards 78.60 by the end of the year, which would constitute a retest of the ascending trendline from the March 2020 and August 2021 lows. A move above 78.60 would suggest that a false bearish breakdown occurred at the end of November/beginning of December, setting up a return back towards the highs above 82.00 sometime in early-2022. 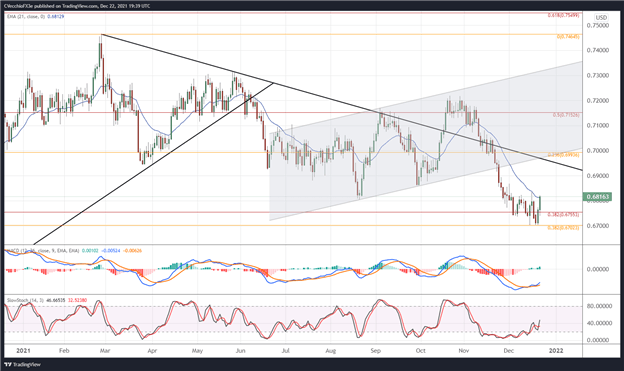 NZD/USD rates recently found support near the 38.2% Fibonacci retracement of the 2020 low/2021 high range at 0.6702. Like their NZD/JPY counterpart, the pair is also on the verge of closing above its daily 21-EMA for the first time since November 9 – an indication that the December lows have been established. Daily MACD is pressing higher (likewise still below its signal line), but daily Slow Stochastics have already advanced through their median line. A return to the monthly high at 0.6868 looks likely in the near-term, and a breach of said level would set up a return to the descending trendline from the February and May swing highs above 0.6900 thereafter. 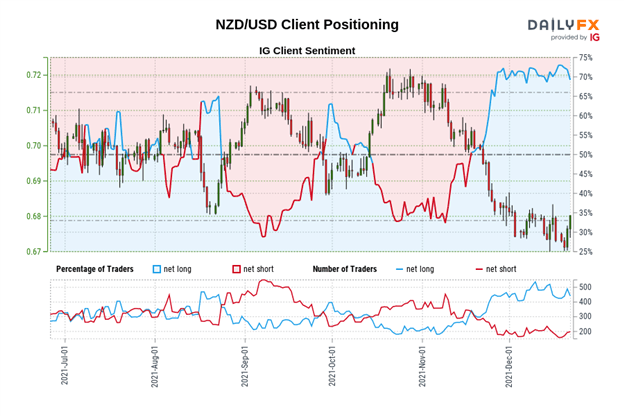 Traders are further net-long than yesterday and last week, and the combination of current sentiment and recent changes gives us a stronger NZD/USD-bearish contrarian trading bias.