The risk-sensitive New Zealand Dollar has largely outperformed it haven-associated counterparts in recent months. This strength looks set to endure in the near-term as bullish technical patterns take shape on multiple NZD crosses. Here are the key levels to watch for NZD/CHF, NZD/JPY and NZD/USD rates. 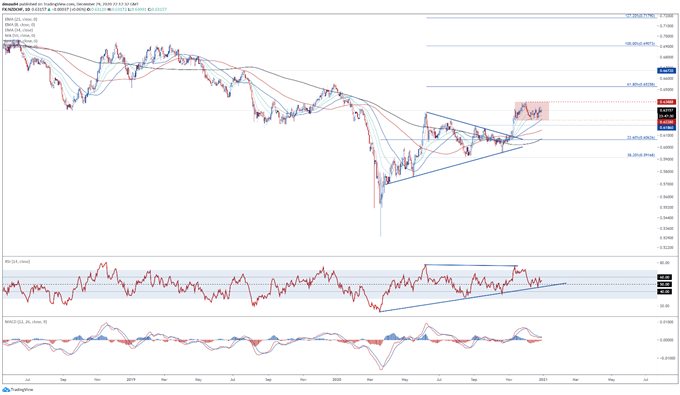 The formation of a Bull Flag continuation pattern hints at further upside for NZD/CHF rates, as price consolidates constructively above the trend-defining 50-day moving average (0.6238) and psychological support at 0.6300.

With the RSI and MACD indicator tracking above their respective neutral midpoints, and the slopes of the 50-DMA, 100-DMA and 200-DMA notably steepening, the path of least resistance seems higher. A daily close above the December 28 high (0.6350) could ignite a push to challenge flag resistance and the monthly high (0.6388).

Clearing that probably validates the bullish continuation pattern and carves a path for buyers to challenge the 61.8% Fibonacci (0.6526). The pattern’s implied measured move suggesting price could surge to test the July 2019 high (0.6672).

On the other hand, drifting back below psychological support at 0.6300 may ignite a retest of flag support (0.6228), with a breach opening the door for sellers to drive price back towards the sentiment-defining 200-DMA (0.6070). 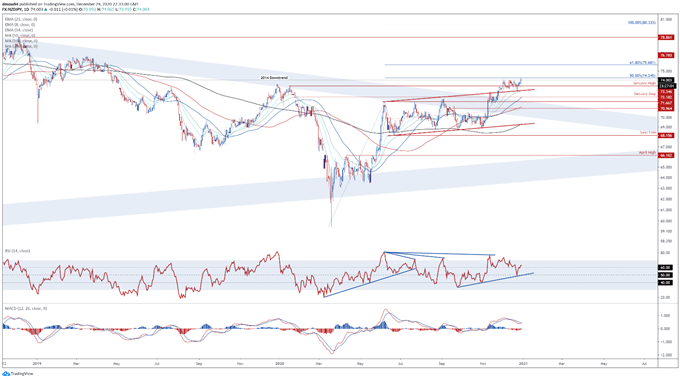 NZD/JPY rates also appear to be gearing up for an extended topside push after storming away from Ascending Channel resistance-turned-support and the 34-day exponential moving average (72.94).

A potential bullish crossover on the MACD indicator, in tandem with the RSI pushing back above 60, suggests that further gains may be in the offing.

Gaining a firm foothold above the 50% Fibonacci (74.24) on a daily close basis would likely signal the resumption of the primary uptrend and bring psychological resistance at 75.00 into the cross hairs. Clearing that probably paves the way for buyers to probe the March 2019 high (76.78).

Alternatively, failing to breach the December 29 high (74.24) could trigger a short-term pullback towards support at the January high (73.34). 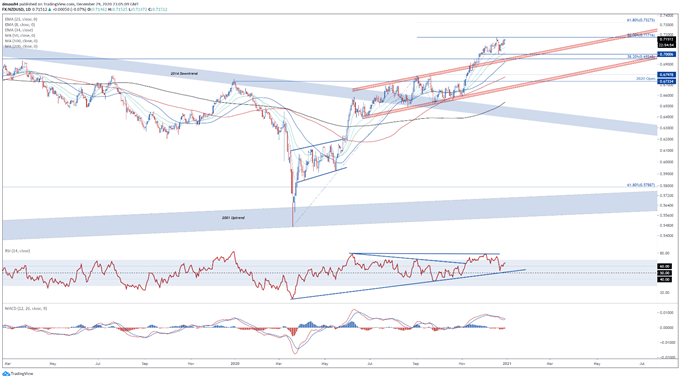 The NZD/USD exchange rates seems to be eyeing a push to fresh yearly highs, as price accelerates away from psychological support at 0.7100 and the 8-day exponential moving average (0.7116).

The path of least resistance remains skewed to the upside, as the MACD gears up to cross above its ‘slower’ signal line counterpart, and the RSI continues to hover above 60.

A daily close above the 50% Fibonacci (0.7172) would probably neutralize near-term selling pressure and generate a push to challenge psychological resistance at 0.7300.

Conversely, sliding back below psychological support at 0.7100 could generate a short-term correction back towards the December 21 low (0.7002).