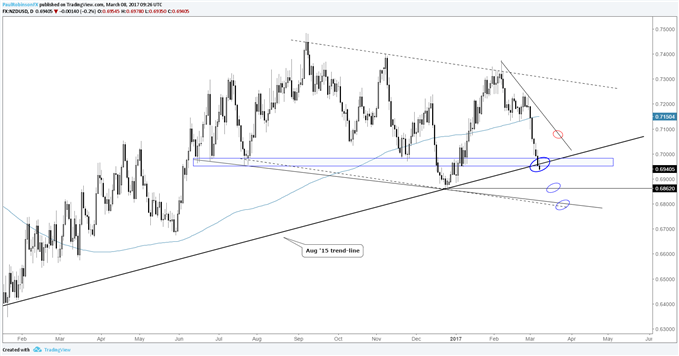 The plunge in NZDUSD has seen it all the way back down to an important trend-line rising up from August 2015, where it spiked down to just under 6200. Also in the vicinity is horizontal support running back to June. The two angles of support are creating confluence, which makes the area in the mid-6900s very important. A turn higher here is needed if NZDUSD is to keep itself out of trouble; a break below support at hand, right here, right now, would put kiwi at risk of trading down to the December low of 6862 and possibly worse. Should selling push price below the Dec low, we would then look to an under-side trend-line in close proximity to the parallel married to the top-side trend-line from where the current decline began.

How NZDUSD responds here will be telling. It is currently trading below support, but that could change by day's end; putting in a reversal day. So we'll wait until the end of the New York session before drawing any concrete conclusions. Kiwi is known for sharp reversals after extended moves, and so it shouldn’t take long to turn higher, if it is to do so. With that in mind, should we see a bounce, but with little pep in its step over the next few days then it may not be long after before it attempts to break support and seek out those beforementioned levels. On the top-side, the first notable level of resistance we will look to on a rally is the trend-line running off the 2/7 high.