The Nikkei 225 continues to retreat with the fundamentals very much in charge. The Tokyo stock benchmark has slid with global equity markets as the economic data run turns increasingly sour. 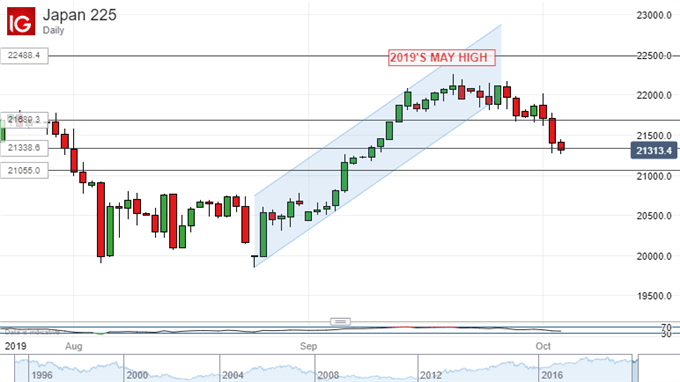 Technically speaking the index has clearly topped out once again below May’s 2019 peak, with the uptrend channel from August 25 consigned to history since late September. The index showed some resilience at that point, declining to slide far after the channel break, but that resilience has now evaporated.

The Nikkei slipped through the first, 23.6% Fibonacci retracement of the rise up from its August lows just this week, with Wednesday’s sharp falls. It’s now flirting with the second, 38.2% retracement at 21,338.6, a point which looks to be in some jeopardy at the time of writing (0230 GMT Thursday). Should it too give way the 50% retracement prop at 21,055 will be immediately in focus. With very little likely solid support between that and the lows of August, it’s reasonable to assume that the entire recent rise will be at risk on any sustained break below that.

Bulls face a stern test at present, but momentum is unsurprisingly heading down to oversold territory and they may yet step back in. The first order of business will be to try and claw back some of this week’s steep falls but this is likely to be a much longer climb back up. Taking back September 10’s closing high of 21,452 might be an encouraging first step.