The Nikkei 225 has settled into a broad range since worries about global trade and, by extension, global growth knocked it and most other major stock indexes as July moved into August.

Trade tensions have by no means dissipated since, of course. The power of good or bad news on that front can be seen in some of the broad daily ranges on the chart on the past two weeks.

So much for the fundamentals. Technically the Tokyo stock benchmark is caught in a wide trading band centered on the 20,288 level. Probably not coincidentally that’s the 61.8% Fibonacci retracement of the rise up from the lows of December 2018 to this year’s peaks of May. Likewise trading action appears robustly capped by the 20,707 region. That’s also a notable retracement level, the 50% pullback of the same rise. 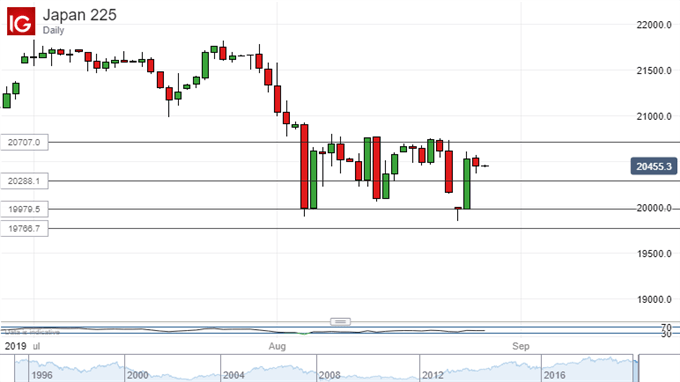 Topping that point on a sustained basis looks more and more like the bulls’ first order of business. They’re going to have to pull it off if they can avoid another topping out and possibly another leg lower. At present it looks like a big ask but the uncommitted may want to see whether or not they have the resolve to do so. Month end is approaching and, if the index can hold near current levels through that, we may see a push higher in the early days of September.

Slips will find some support at that 20,288. If that fails 19979.5 looks a likely prop. It has held the bears off pn a daily closing basis on two occasions in August.

Still, even a test of that would suggest that the index is more obviously wilting and put focus on the effective range base at 19,766.7. That’s 76.4% retracement of the rise up to this year’s peaks and a break below that would suggest that the bulls are in more serious trouble than they appear to be yet. Even if they’re not, clawing back the sharp falls of late July anytime soon looks like a very big ask unless the fundamental trade picture improves.