The Nikkei 225 has put in a solid bounce and is retracing some of the heavy falls seen on the daily chart since late July.

Fully recapturing them looks beyond the bulls in the short-term at least, however. To do so they’d need to take the index back up more than a thousand points to the 21,641 area and hold it there. Still there are some signs that an uptrend is developing. A succession of higher daily closing lows has been printed pretty regularly since the start of August. However, that succession has not been matched by quite such an impressive collection of higher highs. August 13’s top of 20,750 still needs to be taken out. The market is very close to this though and it stands as the bulls’ most pressing upside target at the moment.

The index is also currently flirting with the 50% retracement level of the rise up from December 2018 to March of this year. It’s unclear to what extent this is really acting as resistance but in any case a durable rise above it would probably be a bullish signal. 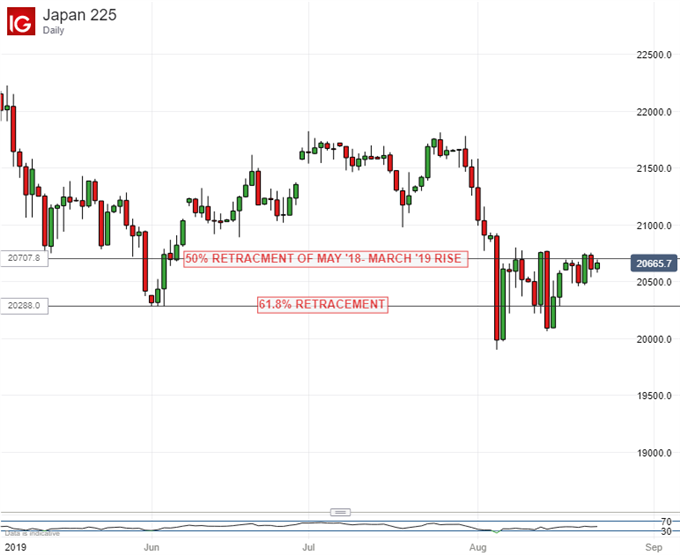 Below that, the 61.8% retracement is one to watch. It’s clearly not impregnable as the index has spent a couple of days below it this month. However, it has so far been disinclined to linger there very long. Watch out to see if this behavior is repeated in any subsequent test of the level. If it is, that’s another bullish sign.

The Tokyo benchmark’s monthly chart looks a bit less cheerful and the end of August could be most interesting with this in mind. A clear uptrend channel can be seen from June 2016 which appears to be under rare, imminent threat. 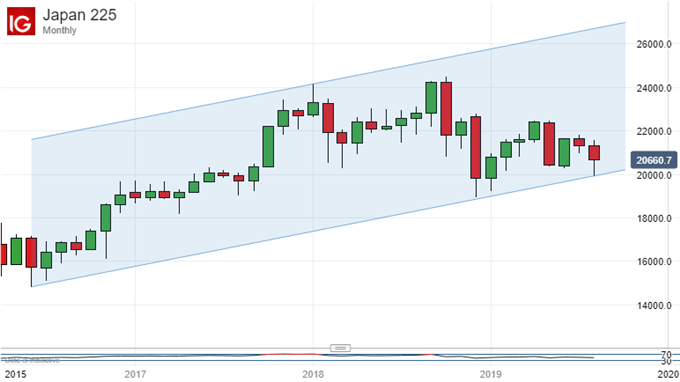 August’s close could therefore be most instructive and will bear watching in relation to this.