The Nikkei 225 has managed a strong bounce in the last couple of weeks which, while not yet enough to see it regain the former uptrend channel, has seen it reach highs not seen since early July when that channel still very much held sway. 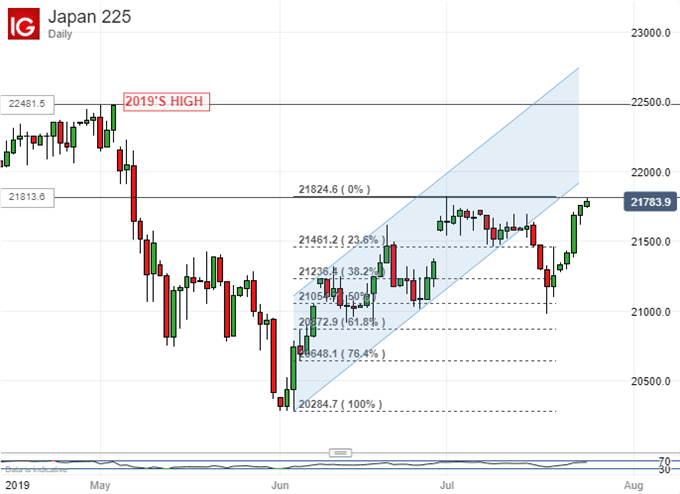 The point at which the Tokyo stock benchmark’s falls were arrested is interesting if not perhaps terribly surprising. On a daily-close basis the Nikkei bounced at 21,236, the second, 38.2% Fiboanacci retracement of the rise up from June’s lows.

The index still hasn’t quite managed to beat its previous notable top at 21,813.6 on a similar basis but could very well do so this week. If it can that will mark another staging post in the bulls dogged retracement of the heavy falls seen between May 3 and June 2. This collapse took the Nikkei down from its highs of 2019 so far to the lows. About 66% of that one-month fall has been clawed back so far in the time since. However, those bulls will face an immediate stern test of they can hold current levels as resistance implied by the heavy falls of May 7-9 will then be in play. The index will have to rise nearly a thousand points more to top those and, while there’s little reason to suppose it can’t in the current fundamental climate, progress is likely to be gradual.

Recent past evidence suggests that initial, 23.6% Fibonacci support at 21,462 is not to be relied upon. That said momentum is edging up towards overbought territory and a period of consolidation around current levels might well be healthy.

Further strong gains from here in the near-term might be overstretch and may well be worth selling into even if it’s only to await a better re-entry point. The uncommitted may be well advised to see whether they see those gains, or that more soothing consolidation, but this doesn’t look like an index in immediate danger of a serious reversal.