The Nikkei 225 remains within the uptrend which has bounced market trading since the lows of early June. However, upside momentum has clearly faded in the last couple of weeks, leaving the channel top uncomfortably far away and perhaps suggesting that a downside test is more likely.

The channel base comes in around 21,425, that’s probably not a level likely to be tried imminently, but it’s certainly closer than the top which is more than 650 points above the market. 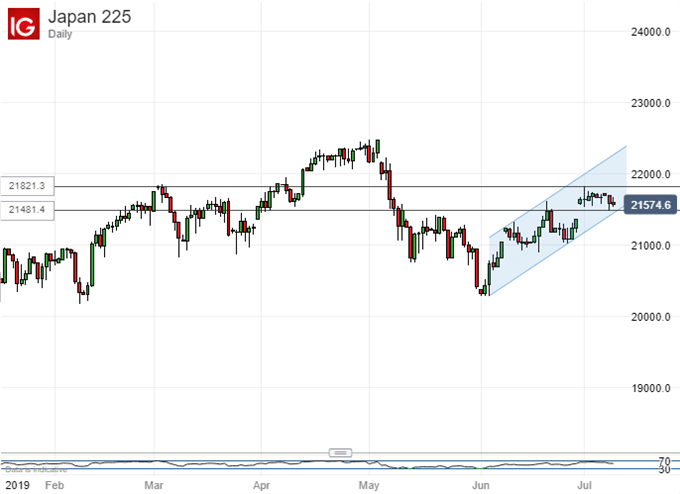 The index has also settled back into a rather familiar trading range whose fate has been an important indicator of direction this year.Between 21,481.4 and 21,821.3 that narrow daily chart band has been quite quickly traded out of whenever the index has got near it.

It was broken to the downside on March 6 and 22, and its top capped the market in the interim. It gave way to the upside on April 11 only to give way again on May 7.

Given all that it might be a good idea to keep a close eye on the fate of this range. Another break to the downside would bring support at the June 26 intraday low of 20,980.7 into immediate focus, with a full retracement of the rise since June 3 very much in prospect if it gives way. That could take the Tokyo stock benchmark all the way back to 20,243.

Any sustained break of the range top looks most unlikely in the near term and, even if it happens, consolidation in that area would probably be needed before the rally could be reignited. If it can then resistance at May 6’s high of 22,121 would be the bulls’ next hurdle, but a test lower looks to be by far the most likely prospect.

Whether you are new to trading or an old hand DailyFX has plenty of resources to help you. There’s our trading sentiment indicator which shows you live how IG clients are positioned right now. We also hold educational and analytical webinars and offer trading guides, with one specifically aimed at those new to foreign exchange markets. There’s also a Bitcoin guide. Be sure to make the most of them all. They were written by our seasoned trading experts and they’re all free.