The Nikkei 225’s impressive bounce from its June lows has continued, with its daily chart uptrend looking quite secure. 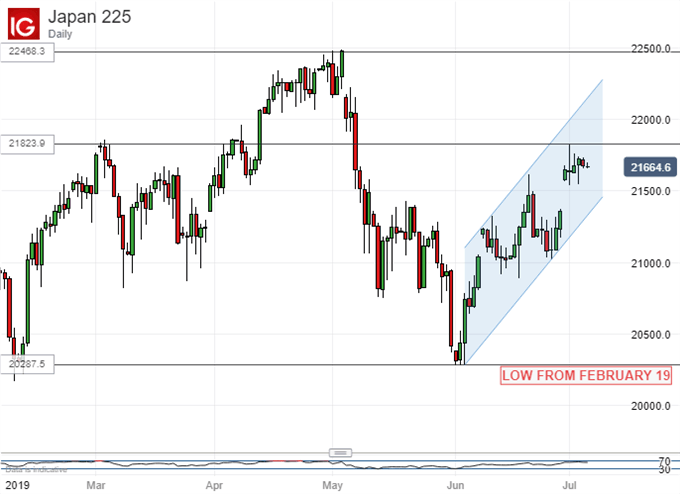 The more cautious might point to the clear reduction in daily trading ranges seen in the past few days as evidence that the bulls are becoming less sure of themselves. That may be the case, of course. But such narrowing is often seen before major holiday breaks and the US Independence Day holiday this week may well explain it.

At any rate the Japanese benchmark looks comfortably enough within its daily chart up-channel. The channel base is after all a good way below the market now, at 21,340, with more immediate support likely closer to hand at June 20’s close of 21,458. That point is very close to what would be the first, 23.8% Fibonacci retracement of the overall rise since June. That comes in at 21,461.

That said the index has not yet quite managed to banish the possibility of a head and shoulders top formation, even though it looks rather less likely now than it did last week. A fundamental backdrop of record Wall Street highs and the clear post-crisis nexus between lower global interest rates and higher stock markets don’t suggest that these should be bad fundamental times for the Nikkei.

Of course, technically speaking the bulls still have plenty of work to do if they are to completely erase the steep falls which took the index down from May’s peaks to the lows of early June.

The fightback has been a lot more dogged and gradual than the fall, but, as long as that uptrend channel endures, it’s still on.

Near-term upside targets are 21,858.4, the peak of early March, and then in the 22,030 region. That latter area would be important as it would mean that the big daily falls of May 7 and 8 had been clawed back.

It’s probably worth pointing out, though, that the bulls still have quite a task on their hands of they are to convincingly break the daily chart downtrend which has seen a succession of lower highs since October, 2018. 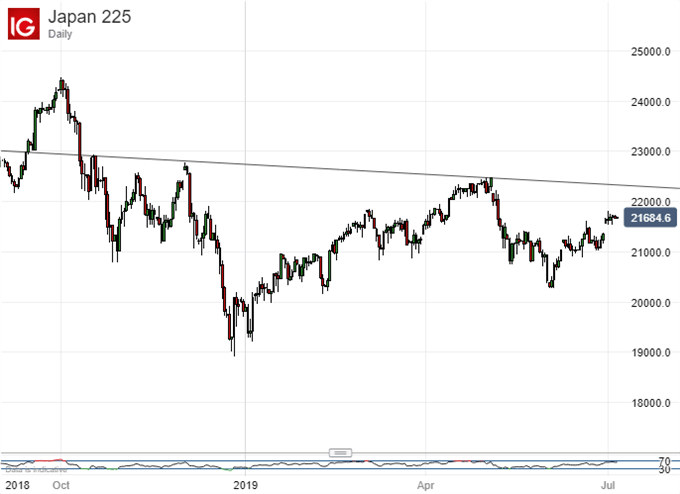 This longer-term daily chart downtrend may be a more realistic picture of the Nikkei’s position.