The Nikkei 225 had an impressive run higher into mid-month which took it past its previous notable daily chart peak. However, momentum does seem to have run out and the index looks to be in some danger of making a significant top.

June 19’s peak of 21,610 took the Tokyo equity benchmark nicely above May 22’s 21,291, a top which had stood in the interim. That mid-June bounce seemed to promise that the rise up from four-month lows seen on June 2 was still well in play and had more to offer.

However, the action seen since suggests that the bulls don’t have long to press their case again. 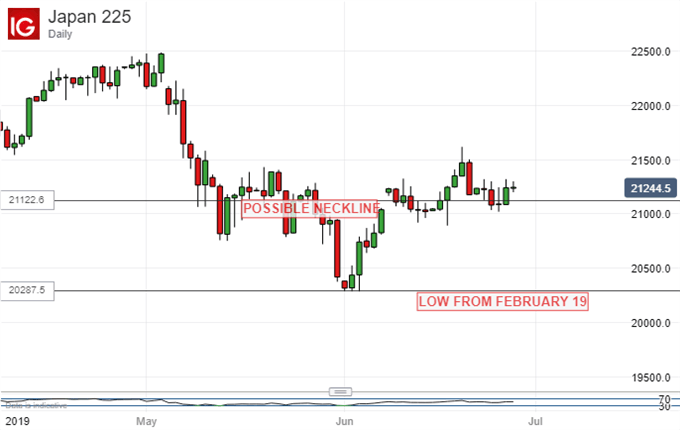 The index would appear to be in some danger of forming a head and shoulders top with focus now on the putative neckline at 21,122.6. If the index can stay above this on a weekly or monthly closing basis then there may be scope for hope that what we are seeing is some consolidation rather than the start of a new, weaker phase.

If however that point is surrendered then those February lows would quickly come back into focus and the chances that the Nikkei did indeed top out on June 20 will have greatly increased.

If the bulls can hang on then their first upside target will probably be the previous peak. They will need to stake a durable claim to this, however, before the can think of attempting to claw back the quite sharp falls seen between May 3 (this year’s peak so far) and May 13.

Retaking these will probably be quite a gradual process.

It’s also perhaps worth noting that we’ve seen plenty of daily candles lately boasting a very narrow range between their daily open and closing levels. This can be indicative of deep uncertainty in the market and those currently uncommitted might want to wait and see if those candles stretch a little in the sessions ahead.