The Nikkei 225’s dominant daily-chart uptrend looks to have survived a test this week. However a potentially-damaging ‘lower high’ remains very much in prospect and the bulls still have work to do if they are to defend the progress made this year. 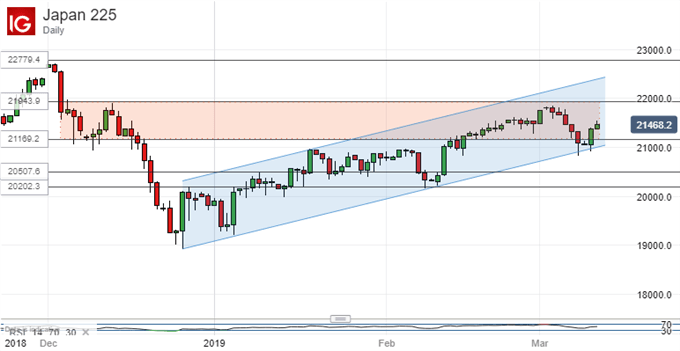 The blue-chip Tokyo benchmark has edged back into the trading band which had marked trade since mid-February. Previously that range had bounded the index between early and mid-December. That was just before the six straight daily sessions of sharp falls which took the index down to this year’s lows, falls which the bulls have yet to fully make back.

Their first target now is probably consolidation within that trading band, which would look a lot more convincing if it could be maintained on a weekly or monthly close. Once the index is comfortable there then it could try for the last significant peak. That’s December 12’s 21.944.

That in turn guards the way to November’s top in the 22,790 area, however that looks like a big ask at present, even if this year’s uptrend channel remains intact.

Immediate support now comes in at the range base of 21,169, with the channel base of 20,992 in focus if it gives way. Below that a support band from last month with its top at 20,507 would probably come into play.