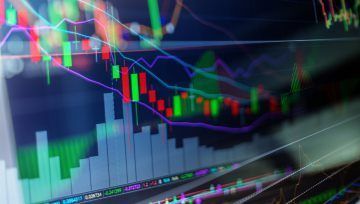 The Nikkei 225 remains very much in the broad uptrend which has characterized trade on the daily chart since late December. 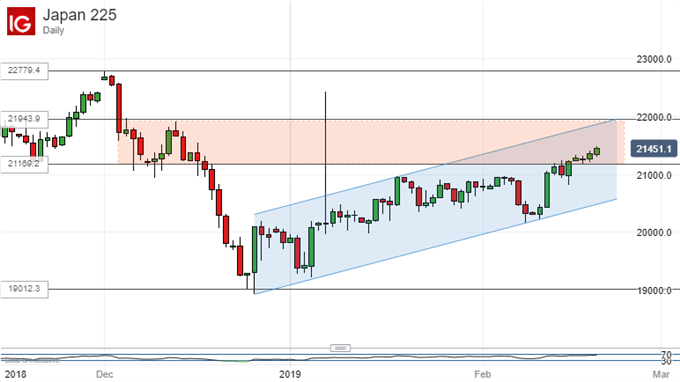 Indeed, that uptrend took another leg higher in the past week, breaking conclusively into a new trading range. That range is in turn marked by the top of the sharp fall which floored the index and, it should be noted, many of its global peers between mid and late December.

The peak of that range comes in at 21,943.8 and that is probably the bulls’ most important near-term upside target. Even if they can’t get there, consolidation within this range-rather than a retreat below it- will probably be seen as quite a bullish sign.

If the index can hold on at this altitude then November 30’s peak at 22.779 will be the medium-term target, although the index does look a little overbought at current levels and a rest will probably be needed before we can see any sort of durable attempt at that peak.

As for the downside, channel support comes in around the 20,409 level. That’s quite a way below the market and I don’t expect a near-term test of that unless global risk appetite takes quite a knock. Further up there’s probable support at 20,840. That’s where the first, 23.6% Fibonacci retracement of the current climb comes in.

A retest of even that would mean that the new trading range had been abandoned to the downside, however, and a lack of consolidation around that level might presage more falls.

Whether you are new to trading or an old hand DailyFX has plenty of resources to help you. There is our trading sentiment indicator which shows you live how IG clients are positioned right now. We also hold educational and analytical webinars and offer trading guides, with one specifically aimed at those new to foreign exchange markets. There’s also a Bitcoin guide. Be sure to make the most of them all. They were written by our seasoned trading experts and they’re all free.