The Nikkei 225’s daily technical chart looks a little worrying for the bulls at this point. The Tokyo blue-chip benchmark broke below its dominant uptrend channel at the end of last week and has faded further away from it in the sessions since.

Fundamentally speaking this down-move has been far from unique to the Nikkei. A new wave of risk aversion has rippled across the world’s financial markets. Trade worries, collapsing oil prices, growth fears and jitters in Europe related to both Brexit and Italy’s budgetary standoff with the European Union were never going to make a very equity-supportive cocktail.

Technically the Nikkei’s bounce faded out on in the 22,540 region last Wednesday, well short of the previous significant peak. That was the 22,950 hit on October 17. Had the bulls been able to retake that region and hang on, they might now be considering another crack at this year’s multi-decade peak of 24,467 reached on October 1.

As it is, they could rather be faced with a trip back to the year’s lows. 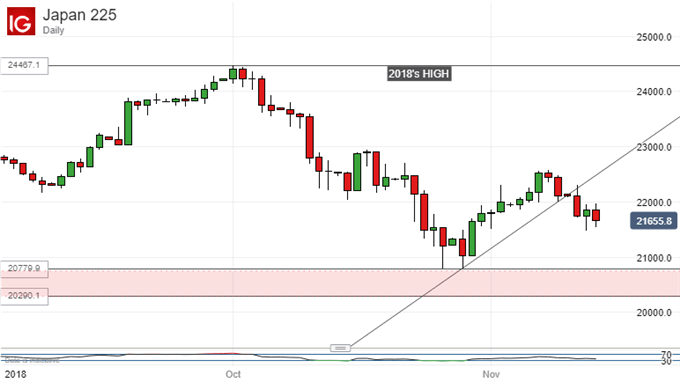 For now a broad band of support between the intraday lows of last month and the nadir of late March at 20,290 guards them. It’s the red zone you can on the chart above.

If the index can build some kind of base between current levels and that range top, then perhaps the bulls can hope to regain control of events. If however the index slips back into that support zone then a trial of its base is probably only a matter of time.

The first likely upside target comes in at 22,588. That is now the most recent significant high, printed last week. However getting even back to that looks like a big ask given current risk appetite and more downside toward that support zone looks more likely, whether or not it gets there particularly quickly.

Watch Thursday’s close carefully. Another ‘lower low’ would make it five out of the past six sessions- a discouraging sign.