A collapse in global risk appetite fueled largely by trade war worries has seen most major stock indexes under pressure and the Nikkei 225 is no exception.

Indeed the Japanese blue-chip benchmark has shed just a little less than 2,500 points in October, retreating sharply from the 27-year peaks hit earlier in the month.

Technically speaking the index has now fallen back in to the extremely broad 23,170-21,520 range which had contained trade since mid May, with the exception of September and October’s impressive run higher. 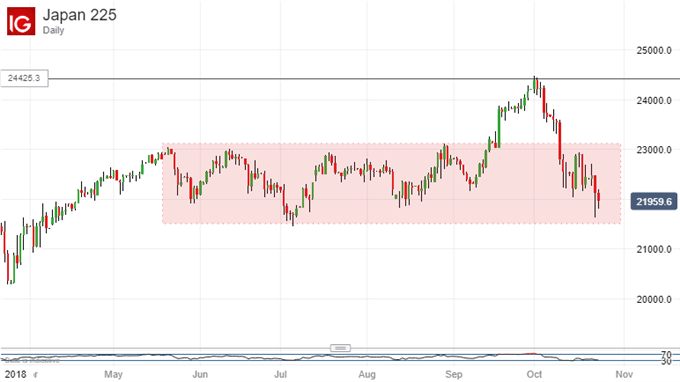 The index has almost reached the bottom of that range on an intraday basis but so far it has held, both in that sense and intraday. Should it break however, there is likely to be some near-term support at 21,280. That level is the fifth Fibonacci retracement of the rise up from the lows of March to those near-three-decade peaks. Below that of course comes complete, 100% retracement at 20.292.

The index does seem to be biased yet lower at this point, but for as long as the broad range holds, bulls can hope for some consolidation, and perhaps some corrective gains back up toward mid October’s 22,850 level.

Current prices put the Nikkei below its moving averages at 20-, 50- and 100 days, so there may be scope for a little bounce, but that will be very dependent on the overall tone of risk-aversion well beyond Japan.

However, the Nikkei does now seem to be in more serious difficulties from the bullish side. Its monthly chart shows how October’s falls have taken it very close to a downside break of the uptrend which had previously been in place since June, 2016. 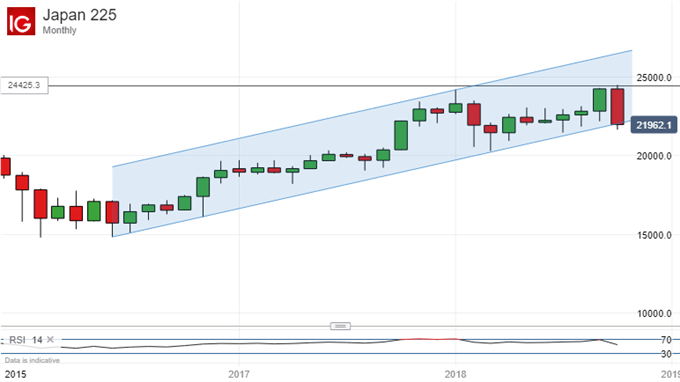 It might make sense for the uncommitted to await this month’s finish with close reference to this chart. There is after all only a week to go.