Nikkei 225 Technical Analysis: Sharp Falls Leave Bulls Down, Not Out

The Nikkei 225 is of course sharing fully in the current bout of global risk aversion which has sent equity lower across the board.

The Tokyo stock benchmark has fallen more than 1,700 points since the end of September, with particularly sharp falls seen in the past week. Technically speaking the index has now retraced nearly all of the sharp up-move seen since September 9 and is now back within the broad trading range which previously held sway between then and mid-May. 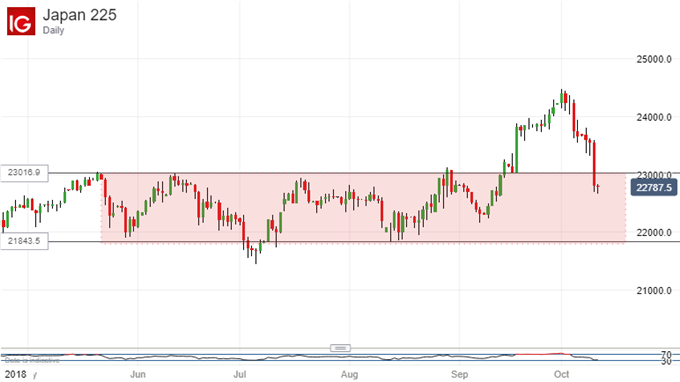 Of course, we must keep a sense of perspective. The recent, October 1 peak was the highest point the index had reached since late 1991 and with that in mind the current slide doesn’t look as bearish as it might. Indeed if the bulls can keep the index within that support zone, then the index may yet avoid serious damage to the bullish thesis which has held sway for much of the year.

Below it, however, things may get more serious. The last couple of days’ slide has already taken the Nikkei down through the first two key Fibonacci retracement levels of its rise up to that October peak from the lows of March. 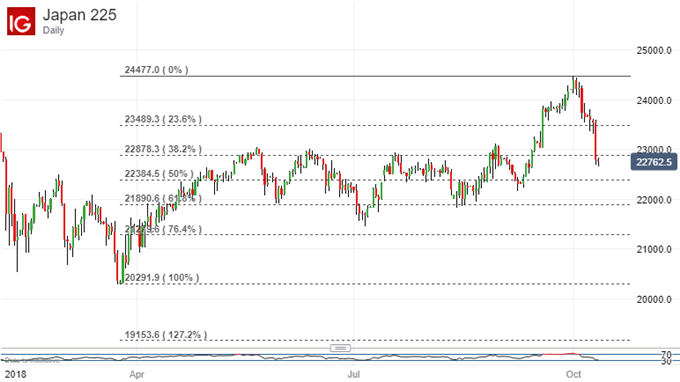 The next retracement, 50% lies at 22384.5. That still lies within our trading range so even a break of that need not be too much of a worry, even if it should probably ring alarm bells.

The 61.3% retracement however lies at 21890.6, which is the bottom of the range. Should that give way then the bullish thesis would be in severe doubt and investors should probably brace for further falls.

Upside targets don’t seem particularly relevant at present, and in any case the bulls are going to have to work hard to make back the recent sharp declines. A daily or weekly close above September 14’s highs in the 23,200 area might be a first sign that their resolve is returning, but I would expect more downside tests before we see that.