Another week, another 27-year peak for the Nikkei 225. The seemingly unstoppable Tokyo stock benchmark continues to inch higher and, unsurprisingly, is starting to look in need of a rest.

The index has soared well above its 20-, 50- and 100-day moving averages in its climb to new peaks not seen since late 1991. However, it is now looking quite solidly overbought, with its Relative Strength Index at 74, well above the 70 level which usually sets alarm bells ringing.

The question for traders is how much lower consolidation is likely to take it. The index is a shade below its most recent significant high, October 1’s intraday 24,495 and there looks to be a cluster of modest support between 24,015 and 23559- the effective trading range in play between September 18 and 27. 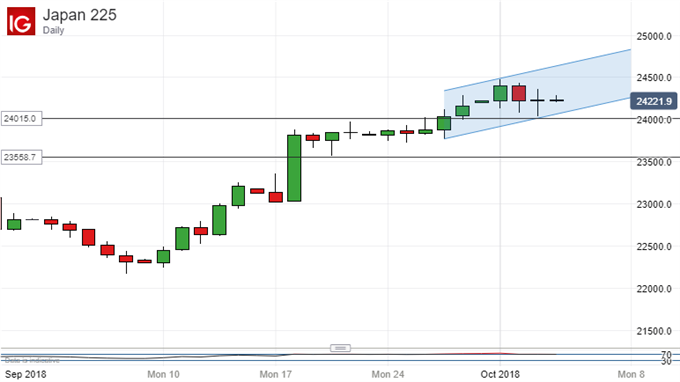 However, it seems unlikely that that range would survive a very stern test, but its giving way need not be in any way fatal to the bullish cause. The index is also well to the North of even the first, 23.6% Fibonacci retracement of its rise up from the lows of March to the highs of this month. 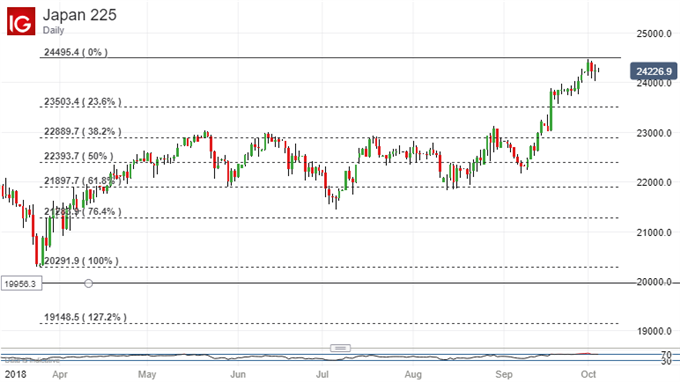 That comes in at 23,503 and, for as long as it holds, it seems unlikely that the bulls will feel that they are in an serious difficulty. They might even remain reasonably sanguine for as long as the second retracement holds, at 22,889. However, I don’t even see that being tested in the short term.

At 27-year peaks, possible upside targets are tricky to pin down, but October’s high is the obvious initial target once consolidation has settled the current rather rampant overbuying.