Nikkei 225 trade is arguably more a fundamental story than a technical one at present, with trade headlines and general risk appetite dictating day-to-day direction. The trade-war story tends to focus on relations between China and the US, but as a persistent runner of surpluses with the US, Japan is in uncomfortable focus too.

Still, for all that the Tokyo stock benchmark looks quite comfortable from a technical perspective. The index remains close to highs we haven’t seen since February and investors seem reasonably content to hold it there. This week’s trading action has taken the index once more back above the range which contained trade between most of July and early August. 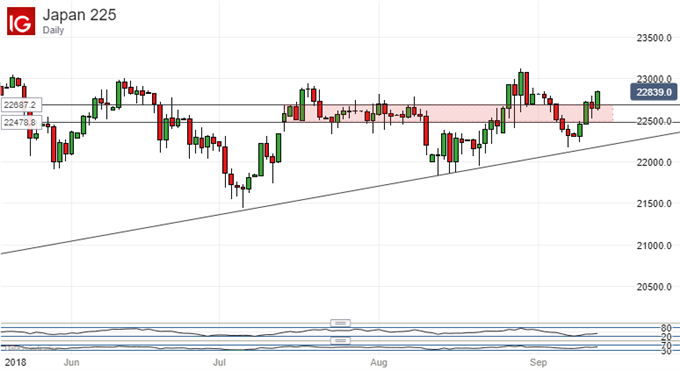 For as long as it stays above that line, the more enthusiastic bulls will no doubt target the most significant recent high, August 29’s intraday peak of 23,118. However, it’s obvious that the foray which took the Nikkei to that point didn’t last long, and it’s tempting to suggest that any other near-term attempt will probably fail too, given the rather hair trigger nature of risk appetite.

Still, for as long as the index remains above that 22,682 support line another try will be likely.

More broadly though, it’s notable that the index remain above a well respected uptrend line from the lows of March 25.

Indeed the index is now a good 100 points or so above the support offered by that line, and it’s hard to see the index as being in much seriously jeopardy for as long as that’s the case. Falls will probably find support below that at 22,455. That is the first, 23.6% Fibonacci retracement of the rise up from those March lows to the peak of August 29- not yet surpassed.

Be wary of daily closes below that, however. They might well bring second-retracement support at 22,040 into bearish focus. A fall that far anytime soon would see that downtrend line broken