The Nikkei 225 is getting perhaps dangerously close once again to a former key range base and, indeed, has nosed below it on an intraday basis.

That base is the 22,479, a level which kept the bears at bay in terms of daily closes between July 13 and August 9. It was then relinquished until August 26. 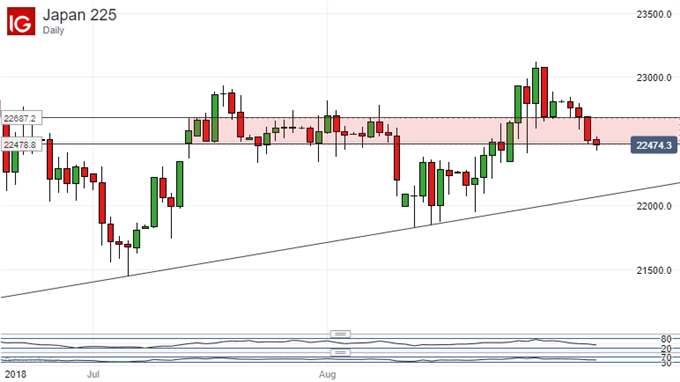 The Tokyo stock benchmark has endured a rough few days since making its most recent significant peak on August 29. Five of the subsequent seven sessions saw the index close lower, often quite sharply. There was sound enough fundamental basis for this, with worries about global trade and emerging markets combining to sap investor risk appetite, which was already pretty jumpy.

It now looks likely that that support point will give way, probably this week. Notably it coincides closely with 22,501.4. That is a number to conjure with as the first, 23.6% Fibonacci retracement of the rise up to last month’s peak from the lows of late March.

If it does crack then focus will inevitably switch to the second, 38.2% retracement point, which comes in at 22,082.03. The index held at, and bounced back from, that point in mid-August and may well do so again on another test.

It is probably also worth watching the upward trend line in place since early July. It looks pretty valid and the index remains some way above it despite recent falls. It should provide support in the 22,000 region, if tested.

To the upside, bull need to recapture and consolidate the old range top at 22,687.2 before they can think of more adventurous levels above it. A break of that level does not look very likely this week.