The Nikkei 225 has taken its impressive rally one stage further this week, and broken back upward to peaks investors won’t have seen since January of this year. 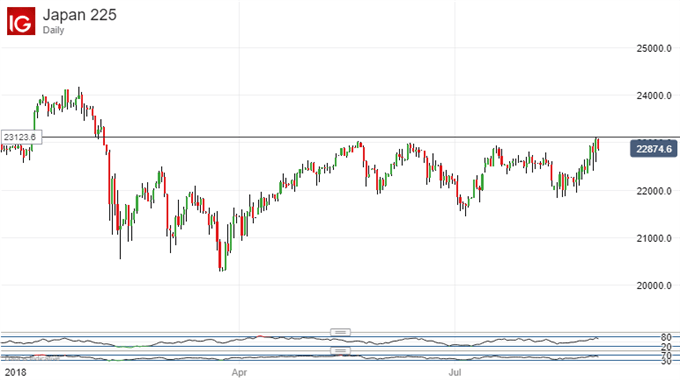 Still, close in a little more narrowly on the Tokyo stock benchmark’s daily chart and those gains look a little less safe. At the time of writing (0300 GMT Thursday), the index is below resistance levels generated by the peaks of May, June and July. It had topped all of these in the past week, but needs some daily and, ideally weekly closes above them to make them stick. And we haven’t seen them yet. 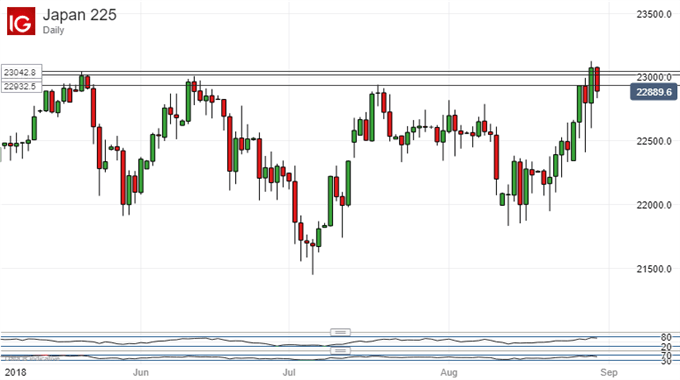 As the chart above shows, this market is only just below that key resistance zone at present, so the next couple of days’ trading action could be very interesting. If the bulls cannot manage closes within that band and, ideally, above it, then the rally we have seen since mid August will be in danger of losing steam.

Should that be the case then a similar band of daily open and closing support from mid-July to early August will probably come into focus to the downside. It lies between 22687 and 22488. As long as the index remains above these levels then bulls can probably still hope for more gains.

However a slide below it could put all the recent rise into doubt make another trip down to the 21900 lows at which that rise began all too probable.

In short, this week’s closes could offer investors some powerful short-term directional clues.