The Nikkei 225 is proving little at present beyond the value of Fibonacci retracement analysis.

The Tokyo stock benchmark bounced last week more or less exactly at the 38.2% retracement level of the rise up from the lows of late March to the peaks of late May. These are upside and downside levels which have not been surpassed since, incidentally. That retracement comes in at 21,993 and the index has not had a daily close below that since early July, even if intraday forays below it have been quite common.

On the upside, we find the 23.6% retracement at 22,395. The index has poked above that at long last in the past couple of days, but it is too early to be sure that it is now firm support. 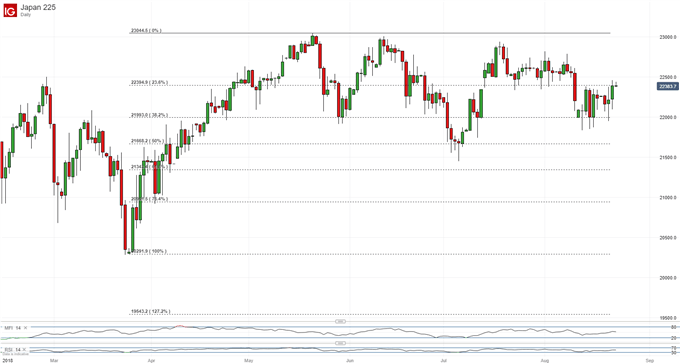 If we see a solid run of daily closes, or even a weekly close, above that level, then the bulls will dare to dream, probably setting their sights on 22,543. This is the point at which a fairly steep fall was initiated back on August 10. If the Nikkei can get above that then early August highs around 22,600 will still bar the way back to the previous significant peak- July 18’s 22,936. Rescaling that looks like a very big ask for the moment, however.

On the downside, that retracement support at 21,993 looks very firm. However should it give way, the bears would be firmly in the driving seat. Below that, targets would likely be scant with the path relatively clear down to 50% retracement which comes in at 21,668. There is a little likely support above that, in the 21,800 region, but it seems unlikely to hold up for long should the 38.2% retracement give way.

As for which test is most likely, well momentum indicators aren’t giving very much away. However, the simple moving averages look slightly bearish, with the 20-day having recently crossed below the 50- and threatening the 100-day. This doesn’t mean of course that that 38.2% level is certain to give way.

But it might be as well to prepare for another near-term test.