The Nikkei 225 has broken above its previously dominant downtrend but the bulls do not look especially comfortable even so.

Monday’s strong gains saw the Tokyo equity benchmark close safely atop the downward channel which had been in place since June 21 and was in any case merely an extension of the fall from the recent significant peak, hit on June 12.

However, so far those gains have notably failed to take the index back into what looks like a key resistance zone marked in red on the chart below. 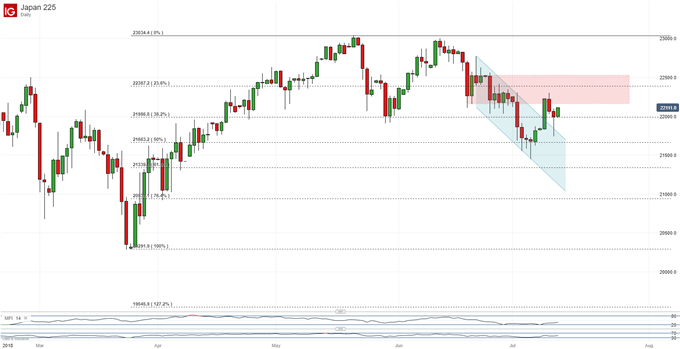 It is composed of closing highs and lows from late June and early July and the bulls are going to have to retake this on a daily and preferably weekly closing basis if they’re going to push the index back up to those recent highs.

At the moment, it seems unlikely that they’ll be able to manage this feat, although bearish trades should probably be tempered with stop-loss buy orders within this resistance zone.

The downside there is possible support at 21986.8. That’s the second, 38.2% Fibonacci retracement of the rise up from the lows of late March to the peak of May 21 (the first was abandoned on June 26). However, that prop has already given way once before being retaken and it’s likely that the next, 50% Fibonacci retracement level will prove more durable.

It comes in at 21663.2 and, probably not at all coincidentally, that is where the last bearish foray lower ran into trouble back at the start of this month.