The Nikkei 225 remains caught in a quite pervasive downtrend, which has endured since it topped out back on June 12.

That peak itself was quiet significant as it came in at 23023, which is just about exactly where the bulls had been routed in their previous assault. That petered out on May 19. Coupled with the latest bull failure it looks as though we might be seeing a double top reversal for the Tokyo stock benchmark, which could well portend further significant losses.

However, the index remains for the moment above 21647. That’s an important level as it represents 50% retracement of the climb up from the lows of late March to those twin recent peaks of 23023. It is also the third key Fibonacci retracement level. The first two have already given way in a two-week period which began on June 19. That day’s sharp fall saw the first Fibonacci level of 22378 surrendered on a daily close. 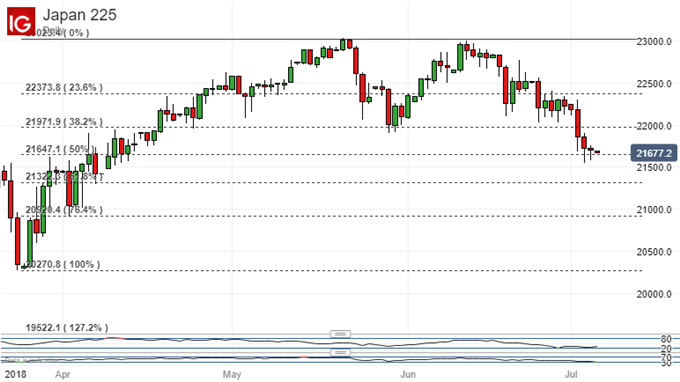 At face value, it seems most unlikely that the bulls are going to make much of a stand at 21647. However, the US July 4 break will be casting its customary thinning spell on global markets and any near term-break lower could be untrustworthy. The level may be topped once again once full market attendance is restored.

However, the Nikkei is also in a pervasive downtrend channel which began on June 21 and is in any case merely an acceleration of its overall slide from those recent peaks.That channel is probably worth respecting in the absence of evidence to the contrary, with momentum indicators and moving averages showing little sign of a trend break. 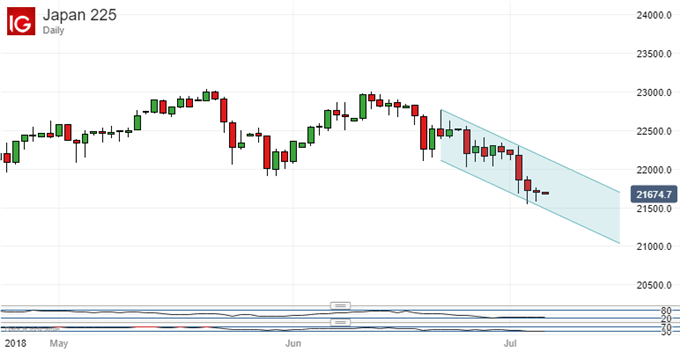 Channel support now comes in around 21458 and of course, a daily close below that would mean that the 50% Fibonacci retracement had been abandoned and that the path to further downside was wide open.