Get trading hints and join our analysts for live coverage of all major market moving data at the DailyFX Webinars.

The Nikkei 225 has this week edged below the lower boundary of the uptrend channel which had previously contained all trading action since May 29. Is this a temporary and probably needed consolidation of recent, bullish exuberance or something more sinister? 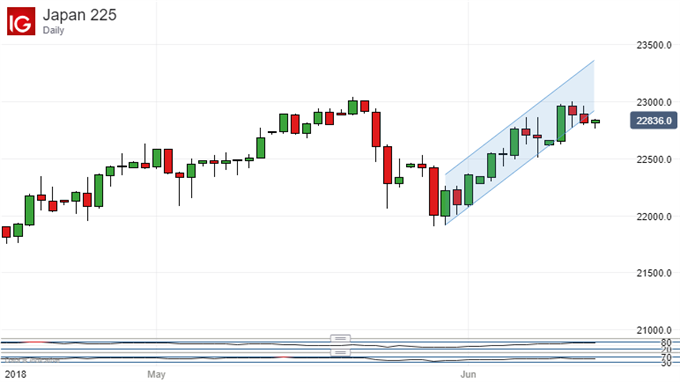 Well, if you’re bullish then the omens aren’t wonderful. Not only has the uptrend clearly given way, but the moving averages also look a bit shaky. The Tokyo stock benchmark is now above its 20-, 50, and 100-day averages. However, while the bullish crossover of the 50- above the 100- which took place on May 20 may have worked its magic in the most recent rise, another less encouraging cross seems to be looming.

The 20-day moving average is now very close indeed to slipping below the 50. 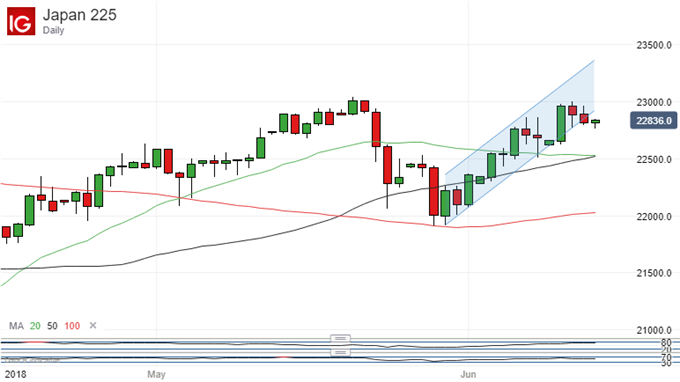 This would usually be seen as quite a bearish sign, if perhaps only a short-term one. However, coming as it does with apparently fading price action it looks as though it might be wise to play for some retreat now, especially as the index’s Relative Strength Index is nudging up toward overbought territory too.

That retreat could find initial support at 22623, which is where the index bounced and headed higher last week. However more tangible props may not make themselves felt until 22395. That is the first, 23.6% Fibonacci retracement of the rise up from the lows of late March.

Second, 38.2% retracement support lies at 21993. That ought to withstand all but the most determined bearish assaults, however, as it forms the basis of the most recent significant bounce and the platform for the current rise. It could well be revisited soon though. 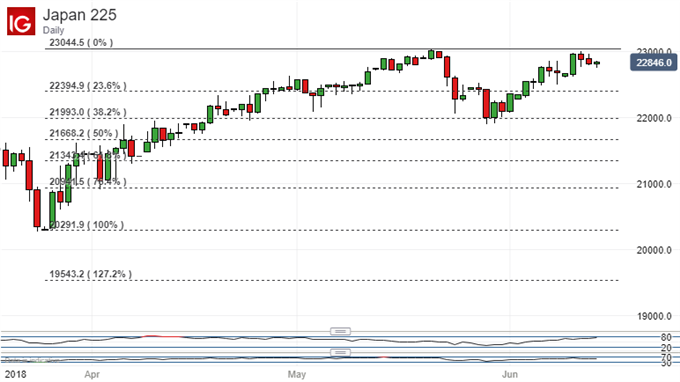 If the bulls can get their acts together again then a daily close back within that uptrend channel would be a good start.