At first glance the Nikkei 225 might seems to be in a bit of trouble, at least if you are a bull.

With its sharp Tuesday fall this week, the Tokyo stock benchmark broke below the elevated range which had previously contained trade since January 4. That band included the intraday of 24,203.9 scaled on January 23- a 26-year high. Falls in Asia that day were largely Wall Street inspired as US bond yields rose and investors looked toward the State of the Union Address and Janet Yellen’s final monetary policy meeting as Federal Reserve Chair. 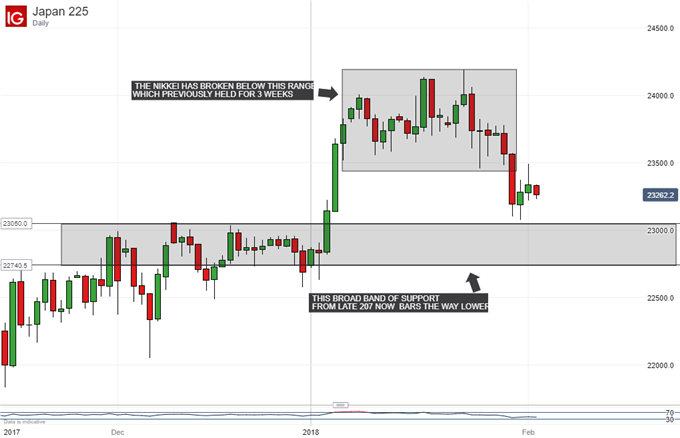 At current levels the index would appear to be hanging in a sort of no-man’s land between that steep decline and the cluster of support from November which is the most obvious bear barrier now.

However, first looks can decieve and the Nikkei just might in a place now where it will reward the keeping of some nerve. After all, it’s surely arguable that a consolidative pause and some modest retracement would hardly be a bad thing at such high levels.

The index now looks reasonably comfortable to judge by its momentum indicators, neither overbought nor oversold. The recent fall has taken it below its short-term, 20-day moving average but, again, that should hardly surprise. The rest of the simple averages remain in calm, chronological order suggesting few signs of growing stress.

And, for all its recent swoon, the Nikkei remains in the upchannel from October 27, 2017 which I mentioned in last week’s technical look at the index. 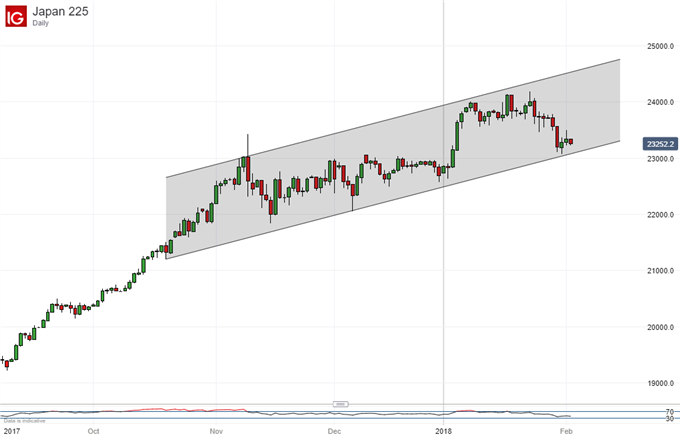 Now, admittedly that channel’s defining lower-bound uptrend could soon come under a little pressure. At the time of writing, (0130 GMT), the Nikkei was at 23,237. That comes in at 23,056 now so another big-fall day could see it come uncomfortably close.

But we are not there yet and the channel has survived two downside tests before. From here it makes eminent sense to keep an eye on that lower-bound level. If it survives this week’s close and endured into next then the Nikkei’s uptrend has survived the falls we saw earlier.

If it doesn’t then those November support levels will come back into play. Probably not coincidentally they come in around the 22,980 mark. That’s also where the first Fibonacci retracement of the long climb from August’s lows to the most recent highs comes in.

If they too give way then the second retracement level will come into play. It may be hard to credit but that level lies at 22,222.2.