Just getting started in the financial market trading world? Our beginners’ guide is here to help

The Nikkei 225 has looked in dire need of a rest for some time. Now it seems to be getting one. But is that all it’s getting?

The breakneck climb from early September saw the Tokyo stock benchmark rise to highs not seen for more than 25 years. Recent peaks had been unmatched since the dawning days of January 1992, and they came backed up by gains for other global bourses. However of course they also saw the index become grievously overbought. A 4000-point climb in a little over two months will have that effect.

Now the index has begun to retrace and that might be no bad thing. So far at least market action suggests a reasonable pause to re-group rather than a sudden outpouring of regret at all this autumn bullishness. Wednesday’s intraday low is the nadir of the pullback so far. It came in at 21,818 – exactly at the second, 38.2% retracement of the rise up from September 8’s lows. 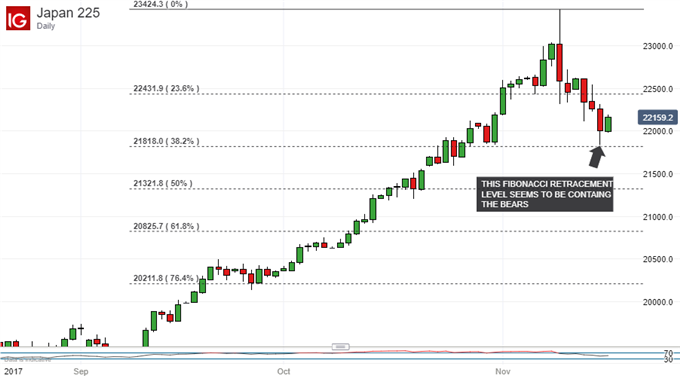 The first retracement of that climb was 22431.9. It gave way quickly and was abandoned as part of the Nikkei’s fall last Monday. However, the second seems to be offering bears a rather sterner test. For as long as it does then the Nikkei’s slip looks sensibly consolidative and need be no bar to a resumption of gains once it fades out.

With this in mind, Friday’s weekly close could be a good, near-term sentiment indicator. If our retracement level continues to staunch losses beyond that point, then the area between it and last week’s close of 22,672 to the upside would seem a plausible consolidative range. It might also be close enough to recent highs to give the bulls fresh hope. After all the first test of the long climb would then seem to have been passed with some aplomb. 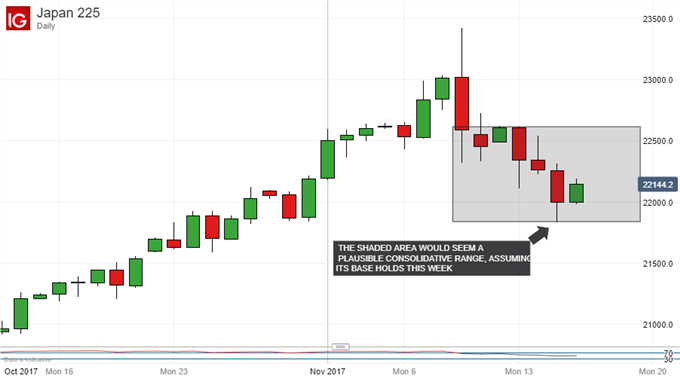 They might have considerably less hope, however, if 21,818 gives way. That event would put pressure on 21,321.8, by which point fully 50% of the climb would have been erased. Below that the bulls would have a lot of work to do to just to hold on, never mind get another assault on the year’s highs on track.

Indeed, a slip under that level might be the first clear sign that the index was no longer merely pausing but more seriously rethinking. But we’re not at that point yet.