Trade the major Asia Pacific market data live and interactive at the DailyFX Webinars. Do join us. We’d love to have you along.

The Nikkei 225 has powered up to 26-year highs this week and this is only the latest chapter of an astonishing run higher which began in early September.

Fundamentally the Tokyo equity benchmark’s vigour is partly explained by the return of Prime Minister Shinzo Abe in October’s snap election. A better-than-expected second-quarter earnings season has also helped. Around 62% of listed companies managing to beat estimates, with heavyweights like Sony, Honda and Toyota all pleasing the crowds. Wall Street’s succession of highs and a rising US Dollar have done the rest, taking the index up by more than 20% for the year so far.

Despite such chunky gains the index appears to be retaining its vigour. Indeed, Thursday’s trade could see it break the uptrend channel which has contained the climb since September the 8- to the upside. 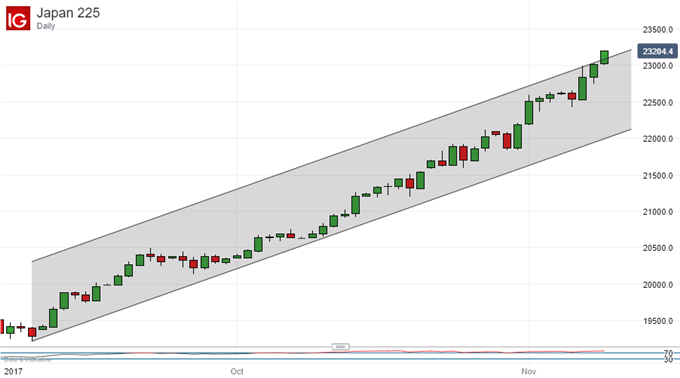 Naturally enough the index now looks extremely overbought. Its Relative Strength Index stands at an eye-watering 82. But that measure has been above the 70 mark which usually signifies overbuying since early October without obviously deterring the bulls. Indeed, if anyone is especially nervous about holding the Nikkei at this altitude, they’re hiding it very well.

One thing is certain though, at some point this index is going to pause for reflection even if it then pushes on still higher. Where might it pause? Well, Fibonacci retracement of the up-move from August 28 to date suggests that falls could be limited to 22,225. That’s where the first, 23.6% retracement now comes in. The chart doesn’t anoint that level with any vast importance, but it was the intraday high on October 31.

Leaving all that to the future, though, the immediate upside target is probably 23,071.1 That’s where the top of that uptrend channel comes in. At the time of writing (0050GMT Thursday), the Nikkei is above that level, trading at 23,169. If it can stay on top of that line into the close, and perhaps maintain its pep into the week’s end, then it looks as though this remarkable bullish momentum will endure despite all that has already gone before.