The Tokyo equity benchmark is at two-decade highs and rose for twelve consecutive days as of Thursday. That’s the longest winning streak since May-June 2015 and it equals the lengthiest since the program of economic reforms instituted by Prime Minister Shinzo Abe and named “Abenomics” was introduced back in 2012. Now hopes for Abe’s return with an outright majority in this weekend’s election is adding fuel to an already roaring Nikkei fire. 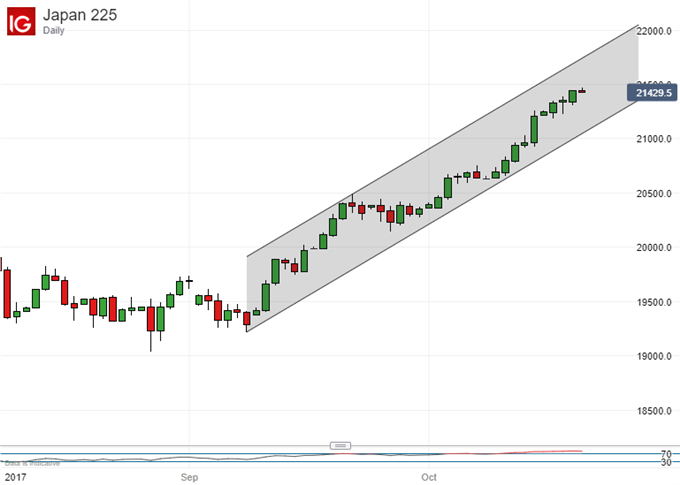 The question now of course is how long can that fire keep burning? The chart above suggests that plenty of fuel remains, with the index right in the middle of a strep uptrend chanel which has faced and survived valid tests of both its upper and lower bounds.

The moving averages tell a positive story too. Mid September saw one bullish crossover, when the 20-day moving average crossed above the 50-day. Now it has been joined by another one. The 50-day was threatening to cross above the 100-day when I took a technical look at the index last week. It has now done so conclusively. 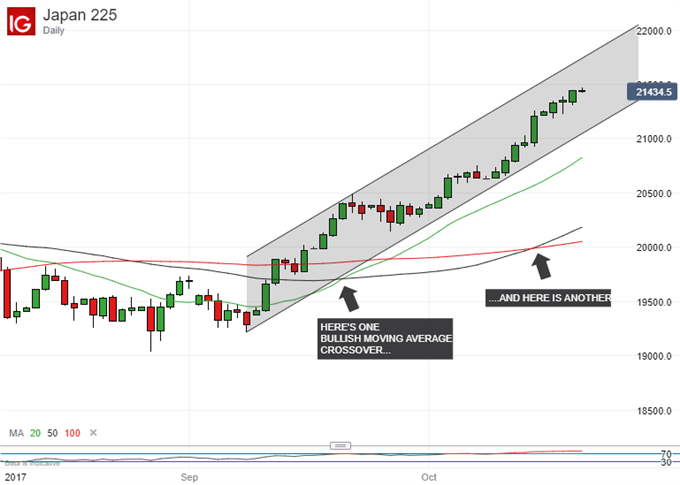 Of course after such a breathless charge higher it would be natural to expect at least a pause. Sure enough the Nikkei’s Relative Strength Index suggests that the index is now throughly and possibly dangerously overbought. On Thursday the RSI came in at a panting 83. That’s well above the 70 level which usually rings alarm bells.

Still, for as long as that uptrend looks safe, the bulls haven’t got a lot to worry about even if a period of reflective consolidation probably ought to come soon.