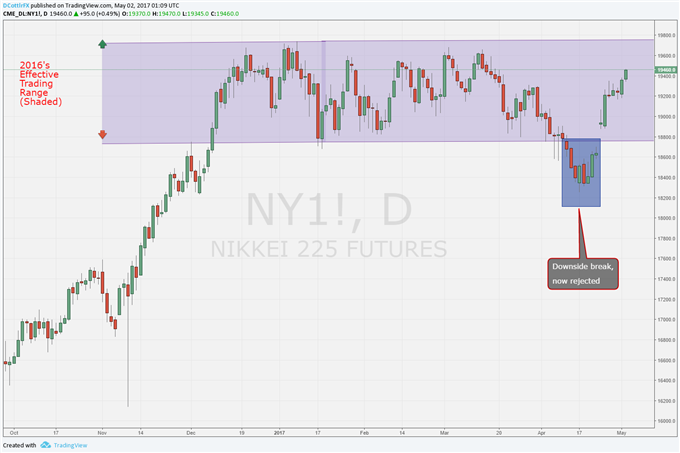 Get live coverage of the major economic events which move the Nikkei with the DailyFX webinars.

Has the Nikkei 225 dodged a high-caliber technical bullet?

It certainly looks like it from this chart. Back on April 11 the index succumbed to a fall which was small in magnitude but potentially bigger in implication because that move snapped to the downside a trading range which had endured for 2017. Indeed, it was put in place by the long climb up from the lows of June 2016.

Strong support was rather scant below that and the entire rise at least from November could have been threatened. That could potentially have taken the index all the way back down to 16898.

However, that fall seems to have been comprehensively rejected by the last few sessions’ action, which has in turn broken a downtrend channel which had been in place for nearly a month: 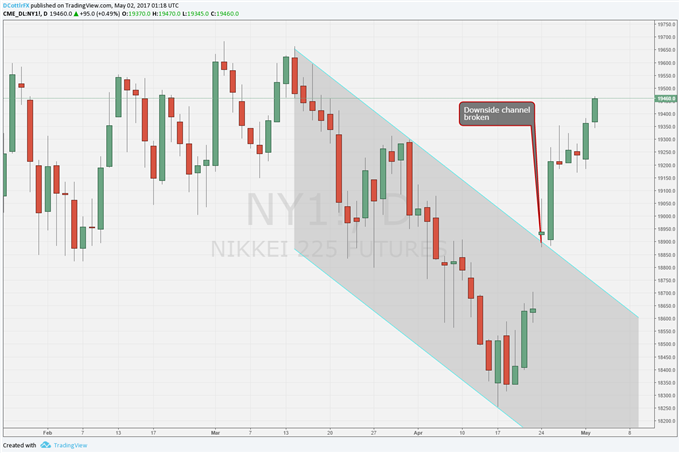 The Nikkei has made six attempts to top them this year, without success. However, at this point the fate of a seventh may be less important than whether 2017 range support at around 18788 holds afterwards. At the moment, that is comfortably far away.

And Japan is now set for three straight days of market holidays into the weekend, the so-called Golden Week break. The fact that impetus to take profit before that seems so weak is supportive in itself. As long as the current young uptrend endures, then the Nikkei will look a lot healthier.

Would you like to sharpen up your Nikkei trading strategy? The DailyFX Trading Guide is all yours.